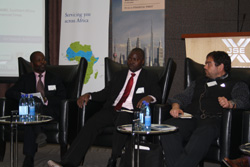 In light of these views, a one-day seminar was held on 1 August at the Johannesburg Stock Exchange (JSE) in Sandton, hosted by Frontier Advisory in partnership with Brand South Africa, the Financial Times, Webber Wentzel and Deloitte. Risk was top of the agenda at the thought-provoking session, which was held with the hope of changing minds and ultimately driving Africa’s investment appeal.

In his keynote address, Miller Matola, Brand South Africa’s chief executive officer, emphasised: “The risks are definitely there, but so are the rewards.” It must be the potential rewards that were attracting unprecedented and sustained investment growth. 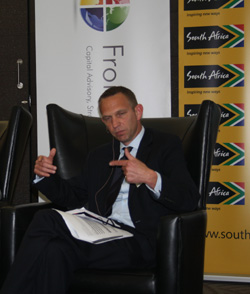 Andrew England, Southern African Bureau Chief for financial times“Despite the economic upheaval in global markets, Africa is the world’s second-fastest growing region and delivers the highest returns on FDI in the world. But it is also a confusing continent of 54 nations, each with their own risk profile, internal and regional dynamics. This makes accurately identifying, weighting, contextualising and pricing these risks – and of course the rewards – a truly daunting task.”

The continent’s market was highly fragmented and its political economy complex, with poor intra-regional enabling infrastructure, weak capital markets and often informal trading links. Public sector institutions were also often weak and the risk of political and social instability was a threat to sustainable business activity. 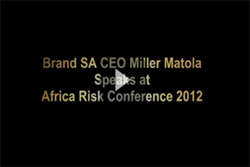 The conference addressed topics such as:

The other keynote speaker was Richard Dowden, the executive director of The Royal African Society. Moderators were Martyn Davies, the chief executive of Frontier Advisory; Andrew England, the southern Africa bureau chief for the Financial Times; and Anushuya Gounden, the head of the Africa desk at Deloitte.
Gounden said: “Risk perception varies: old world, Africa as a development burden, and new world, Africa is a commercial opportunity.”

According to the Financial Times’ 2012 FDI report, which only measures new investment projects or significant expansions of existing projects, for 2011 there was a 29 percent decline in FDI projects into Egypt and a 14 percent fall in Tunisia.

South Africa was the best performing country on the continent in 2011, recording a 57 percent increase in project numbers and an 87 percent growth in capital investment.

Stephan Morais, one of the panellists, said: “Risk is a measure of trust. High expected rewards in Africa exist because of lack of trust in institutions and between everyone.”

Matola added: “The commodities super-cycle has served African growth well. It is a prime source of the vital resources which are sustaining emerging economies in Asia and elsewhere.

The massive new investment in extractive industries from energy to minerals is well documented. And, as food security rises up the international agenda, so too will the demand for arable land. By some estimates 60 percent of the world’s available unexploited cropland lies in sub-Saharan Africa.”

By 2050, about 60 percent of Africans would live in cities – cities that would need infrastructure to be financed and built. According to the United Nations, Africa would have a population of about two billion by 2050.

“We are proud to be amongst the 26 countries which signed an agreement in June last year to create a free trade area that covers more than half of Africa,” Matola said. “We hope that by June 2014, nearly 60 percent of the economy of Africa with a combined [gross domestic product] of $1-trillion [R8.3-trillion] and encompassing 600 million people will be a single free trade area, covering southern, eastern and central Africa.”

He also mentioned other entities, such as the Industrial Development Corporation, which had expanded its remit to include African investment and would consider new or existing companies within Africa with funding needs from R1-million to R1-billion.

The JSE offered a wide range of investment instruments focused on Africa outside of South Africa. Ultimately for South Africa, all this meant the country was well positioned to become a deal-making, financial and professional services hub for the entire region.

“Here we are not competing with our neighbours but with New York, London Hong Kong and other international finance centres.”

Matola concluded that we needed more and deeper dialogue between countries, governments, business, media and the public to dispel out-dated myths and to recalibrate how risk was seen in Africa.