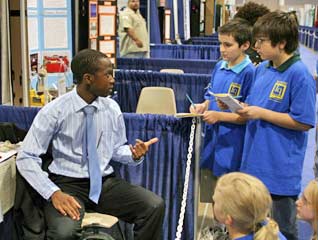 Siyabulela Xuza explains aspects of his
project to youngsters who attended the
Intel International Science and
Engineering Fair in New Mexico, US.
(Image: Eskom Expo)

Young South African scientist Siyabulela Xuza has had a planet named after him, in honour of his work in developing a record-breaking rocket and creating safer, more energy-efficient rocket fuel.

This is the story of Xuza’s rise to greatness, as told by Clem Sunter, a world-renowned scenario planner, speaker and author:

“I was chairperson of the Anglo American Open Scholarship Panel for many years. Because we offered not only basic university fees but also a generous living allowance plus an overseas trip, it was like auditioning for Idols,” Sunter says.

We got an unbelievable response every year which involved some of the most intelligent matric students in South Africa.

Last year in January, we interviewed the brightest of them all – a young man called Siyabulela Xuza. He hails from Mthathta in the Eastern Cape and was awarded an academic scholarship to St John’s College – a top private school in Johannesburg – from Grade 8.

The first question we put to him, as we did to all other candidates, was: “What degree have you chosen and why?”

His response was as follows: “I’ve chosen Chemical Engineering at the University of Cape Town. The reason is that I developed a fascination for chemicals when I was 12 years old. I mixed them in my mother’s kitchen and caused minor explosions to her utter dismay.

“Then I decided to concentrate on a particular project. It was to create an energy-intensive fuel which was safer and more effective than the stuff Nasa [National Aeronautics and Space Administration] uses to propel its rockets into outer space.

“I managed to build a rocket which broke the South African Amateur Altitude Record. I then entered the Eskom National Science Expo and won gold, as well as the Dr Derek Gray Memorial Award for the most prestigious project in South Africa.

“The best prize, however, was to be invited to the International Youth Science Fair in Sweden, where I met the King and Queen of Sweden as well as attending the Nobel Prize ceremony in Stockholm.

“The consequence of that was to be entered into the world’s biggest student science event at the Intel International Science and Engineering Fair in the US. I won two top awards, but what really made my day was that the Nasa-affiliated Lincoln Laboratory was so impressed by my achievement that they named a minor planet after me!”

So, naturally, we gave him the scholarship.

Three months later, he came running up to me at Johannesburg’s OR Tambo International Airport.

“Hey, Mr Sunter, do you remember me?”

“Siya,” I replied, “I’m never going to forget you. How’s the University of Cape Town?”

“You haven’t heard?” he asked, with a questioning smile. “I’ve been awarded another scholarship to go to Harvard University, so I’m off there in the fall.”

He even had the American lingo.

So Xuza is now studying at the university that is ranked number-one in the world.

If you have a powerful-enough telescope, you will find his planet, now known as Siyaxuza, near Jupiter in the night sky.