The South Africa where foreigners fear for their lives is not the South Africa envisioned by Nelson Mandela and the Freedom Charter, writes Thebe Ikalafeng. 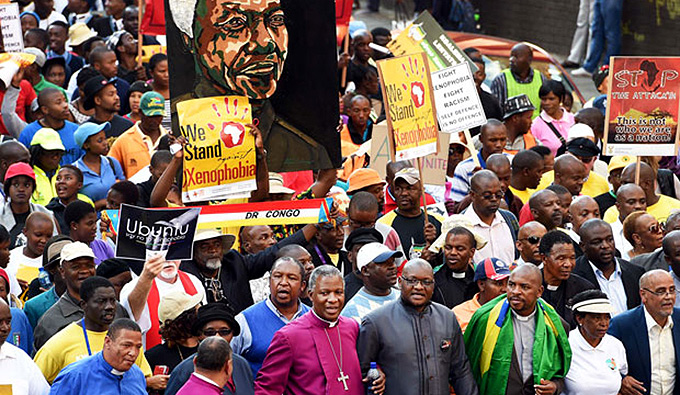 Reflecting on the moment on 11 February 1990 when his 27 years of incarceration ended and he walked toward the promise of a new South Africa, Nelson Mandela once recalled: “I knew if I didn’t leave my bitterness and hatred behind, I’d still be in prison.” His freedom heralded the opportunity of a new start for the pariah nation.

Unsurprisingly, after being issued with his first South African passport eight days after his release, he began a global thanks-giving tour of countries that had supported the anti-apartheid struggle, starting with African states, including Zambia, Tanzania, Zimbabwe, Nigeria and Ethiopia.

Many of these nations’ leaders, such as Kenneth Kaunda of Zambia and Mwalimu Julius Nyerere of Tanzania, sacrificed the welfare of their states to invest in the struggle for South Africa’s freedom.

As President Jacob Zuma reminded us at a briefing at the ANC headquarters, Luthuli House, these nations paid more than lip service to the struggle, providing anti-apartheid cadres with weapons, transporting them across borders at great risk to themselves and accommodating exiles in their homes and communities.

Mandela’s remarks at his inauguration as the first democratically elected president of the new Republic of South Africa summed up the mood of the new nation: “Few of us could suppress the welling of emotion as we were reminded of the terrible past from which we come as a nation; the great possibilities that we now have and the bright future that beckons us.”

Over the next decade or so the hopeful republic, “alive with possibility”, as Brand South Africa defined it, became an example of how to reimagine a nation.

The Truth and Reconciliation Commission, established in 1996 “to enable South Africans to come to terms with their past on a morally accepted basis and to advance the cause of reconciliation”, as the late Dullah Omar, former minister of justice described it, became a universal inspiration and foundation for a forgiving post-apartheid South Africa and for other nations dealing with conflict and reconciliation.

On 8 May 1996, when then-deputy president Thabo Mbeki launched the new constitution, a document drafted by an assembly representing all political parties and liberation organisations, he put it in the broader African context, saying: “I am an African.”

This symbolised not merely the constitutional foundations of a new South Africa but its identification with all of Africa.

The fall of the last colonial outpost was the realisation of the hope expressed by Kwame Nkrumah of Ghana when his country gained independence: “Our independence is meaningless unless it is linked up with the total liberation of the African continent.” 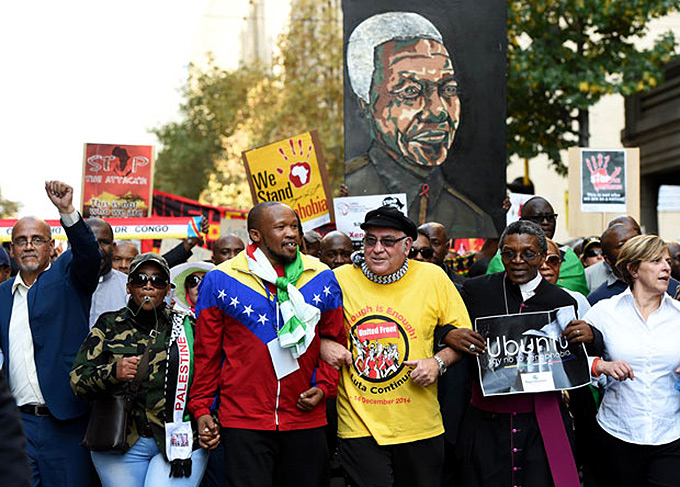 Therefore the xenophobic – or rather, Afrophobic – attacks on the eve of the 21st anniversary of the new republic, in which at least seven fellow Africans have died, 5 000 people have been left homeless and foreign-owned shops have been looted, are unexpected of a nation that owes so much to the rest of the continent.

They were a brutal attack on the foundation of a nation built on “unity through diversity” and Ubuntu – the universal African principle of mutual humanity: “I am because you are.”

As Anglican Archbishop Emeritus Desmond Tutu put it: “Our rainbow nation that so filled the world with hope is being reduced to a grubby shadow of itself. The fabric of the nation is splitting.”

While much has been done to deliver a promised better life for all, with unprecedented access to basic services, many “reasons” have been postulated for this shocking turn of events: an unacceptably high unemployment rate, estimated to be more than 30%, and the widening gulf between the haves and have-nots that has given South Africa a Gini coefficient of 65.0, placing it among the most unequal nations in the world.

About 20% of the population live below the food poverty line – a figure that has decreased from 45.5% in 2011, according to Statistics South Africa – and a staggering 14.6-million (compared with 2.4-million in 1996) depend on state social welfare. Sluggish economic growth threatens the state’s ability to deliver on its 2030 National Development Plan (NDP) to create jobs and reduce poverty and inequality.

The most prominent of the arguments in the debate on xenophobia is that the impressive progress South Africa has achieved since the dawn of democracy has made it a beacon of hope for a better Africa, and a refuge for many across sub-Sahara searching for a better life.

The perpetrators of xenophobic violence argue that the foreigners are the reason for South Africa’s inability to overcome the challenges of unemployment, poverty and inequality.

However “rational” these arguments may sound, this is certainly not the way to deal with them. Perhaps, as Zuma said at the briefing, there has been a failure by the leadership to explain to the broader majority that while the armed struggle was a necessary but last resort to force the end of apartheid, it was not the way to resolve problems.

Xenophobia and violence against foreigners are not consistent with the South Africa envisioned in the Freedom Charter at the Congress of the People, Kliptown, on 26 June 1955.

They are not consistent with Mandela’s dream, which he expressed on 20 April 1964 at the Rivonia Trial, of “a democratic and free society in which all persons live together in harmony and with equal opportunities”. The potential damage to the country is incalculable. It has the real effect of affecting the country in four critical areas: trade, tourism, international relations and citizenship, and its ability to deliver the NDP vision to create jobs and reduce poverty and inequality.

Leading South African businesses such as MTN and Shoprite have invested widely in Africa. MTN has more than 215-million subscribers across its 22 markets in Africa and the Middle East, and international operations account for 74% of its turnover.

Shoprite has about 1 400 corporate and franchise outlets in 16 countries across Africa and the Indian Ocean Islands.

It is reported that Sasol has had to repatriate more than 300 employees from Mozambique in fear of retaliation for the violence against foreigners.

Of the 9.6-million tourists last year, 70% were from the rest of Africa. According to Statistics South Africa, direct tourism contributes about 3% of gross domestic product and more than 600 000 direct jobs, amounting to about 4.6% of direct employment in the country.

Post-apartheid South Africa is the most welcome and represented nation internationally, with representation in 282 states, including 47 of the 54 African countries, second only to the US. Reciprocally, there are 309 foreign representations in South Africa.

Threats against South African businesses and people and the temporary closure of South Africa’s foreign missions in such leading African countries as Nigeria and Ghana have compromised South Africa’s relations with her fellow African states.

What is of particular concern is that while, broadly, these attacks have been portrayed as xenophobic, the most visible victims have been fellow Africans, with countries such as Malawi and Zimbabwe repatriating displaced and traumatised citizens.

The reaction to foreign individuals who have taken their “better life” has cast a negative light on South Africans’ identification with their fellow Africans. There is now a perceived lack of gratitude for the selfless sacrifice made during the apartheid years. 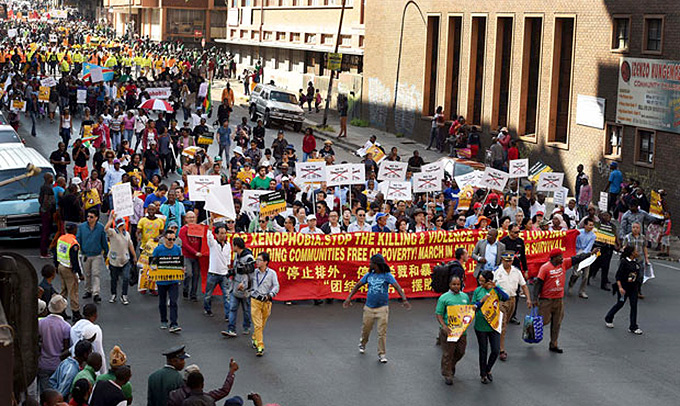 The universal condemnation of these attacks by the majority of South Africans, their call for peaceful coexistence and harmony with foreigners, and the comprehensive response by the government underline that xenophobia is not a South African value.

The attacks were a callous and criminal act by a few that has reinforced an unfortunate perception of South Africa as a crime capital. The eventual deployment of the army in the affected areas affirms that this is a war against the ideal of the new South Africa that should be met with the greatest and most decisive force.

This is a defining moment. It is the new struggle, not just for South Africa – but for Africa.

How South Africa responds will signal how other African nations relate to South Africa in the future, and how they relate with one another should they encounter similar actions.

It is a struggle, similar to those against Boko Haram in Nigeria and al-Shabaab in Kenya, that requires that the affected countries and all of Africa stand together for a better continent.

The world is looking to South Africa once again to lead and re-establish its moral authority.

South Africa can emerge stronger – inspired by its triumph over apartheid, empowered by the universally admired principles and ideals of a constitution that values diversity, human rights and humanity, and guided by the gratitude for and of all of Africa and the world.

This is a defining moment for all of South Africa to take up a new struggle, echoing the spirit of the 16 December 1961 Manifesto of Umkhonto we Sizwe “not (to) submit … hit back by all means in our power in defence of our people, our future, and our freedom”.

This is a defining moment to defend Mandela’s 1994 commitment to “never, never and never again … suffer the indignity of being the skunk of the world”.

This is a defining moment to stand up and proclaim: Not in our name. Not on our watch. Not in our Africa.

As we look beyond this inexcusable episode and rebuild the fractured rainbow nation, it is time to reaffirm our identity with Africa because our African bonds are stronger than the borders that divide us.

It is time to adopt formally and celebrate Africa Day on 25 May in the same spirit as we celebrate our founding on 27 April.

It is time to incorporate the African and South African liberation struggle in school curricula so that we never forget – and never repeat – the mistakes of history. It is time to fly the flag and sing the anthem of the AU along with those of South Africa.

It is time, as the celebrated late Nigerian Afrobeat pioneer Fela Kuti once said, to “identify with Africa, then (we’ll) have an identity”.

The least we can do is to fly all South African flags at half-mast to honour the innocent men and women who lost their lives in the country, where they had hoped to share in the fruits of the freedom that their nations had helped South Africa attain.

Thebe Ikalafeng is a global African branding and reputation architect, adviser and author, founder and chairman of Brand Africa and Brand Leadership, and a director of Brand South Africa and South African Tourism. @ThebeIkalafeng