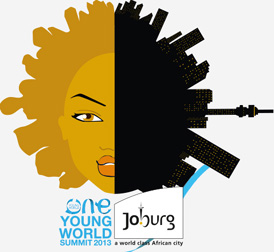 Young people will play a pivotal role in shaping societies of the future by addressing issues ranging from health, education and HIV/Aids to agriculture and the environment at the One Young World Summit, to be held in South Africa from 2 to 5 October.

Now in its fourth year, the summit has become the premier forum for young people of leadership calibre. Described by CNN as the “junior Davos”, it gathers 1 300 future leaders between the ages of 18 and 30, from over 180 countries.

Brand South Africa, the City of Johannesburg and MTN will be supporting One Young World at this year’s summit, which will take place at the Sandton Convention Centre in Johannesburg.

The summit aims to give brilliant young minds a voice and help them share insights and wisdom on global challenges. As a young city, Johannesburg will provide young leaders with a platform to start leading within in their communities. 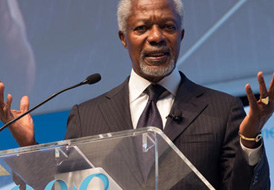 Kofi Annan, former UN secretary general will be a speaker at the Summit (image: One Young World Summit)

A highlight of the One Young World Summit will be a range of special sessions hosted by global leaders in politics, business, the media, sport and the arts – including Sir Richard Branson, Kofi Annan, Arianna Huffington and Jamie Oliver.

Richard Branson, the icon of entrepreneurial success, will hold a question-and-answer session to explore issues such as how to build a better version of capitalism, ways to mobilise corporate resources for social benefit, and addressing social and environmental problems in an entrepreneurial way.

Celebrity chef Jamie Oliver will remotely host a panel discussion with the CEOs of Iglo, Ella’s Kitchen, Green Mountain Coffee and PepsiCo Foods on the Food Revolution, his US-based television show and a movement to fight obesity and get Americans to eat more healthily.

Former United Nations secretary-general Kofi Annan will host a session based on his unprecedented series of Google Hangout discussions, The Kofi Annan Dialogues: Live, conducted in partnership with One Young World this year. Annan will also join musician and global activist Sir Bob Geldof in a session showcasing the work of One Young World ambassadors, including InkuluFreeHeid, a new democracy platform for South Africa, which was inspired by Annan.

Media legend Arianna Huffington, the chair, president and editor-in-chief of Huffington Post Media Group, will speak on “the third metric” – need to redefine success beyond money and power to include well-being, wisdom, the capacity for wonder and the ability to give back.

South Africa is committed to youth development, with community-based youth advisory centres in Johannesburg managed by the mayor’s office, and youth participation and representation in Parliament on a national level.

“The city is delighted to host a dynamic charity organisation that has, in four years’ of existence, already made a global impact to prepare young people for future leadership and create global awareness about the most important issues confronting the world,” says Mpho Parks Tau, Johannesburg’s executive mayor.

Tau hosted 20 delegates ahead of the event, who will represent the Johannesburg at the summit.

Among these is summit ambassador Geneve Kroutz, who has a passion for doing good business that is socially conscious and responsible.

“A business should contribute positively to the community in which it operates and not simply exploit it,” she says. This principle is practiced in her own farming business, benefiting both her employees and the community around the farm.

She is also a mentor for DreamGirls South Africa, which promotes the enrolment and success of disadvantaged young women in tertiary education.

Mandisa Dlamini is an example of a young leader working for sustainability and change. A BSc graduate with a major in agricultural economics and now an agri-specialist at Absa, she will be part of the delegation representing Johannesburg at the summit.

Her job is to provide financial solutions to farmers, insight on current agricultural trends and recommendations on the right product to help them expand their business.

“The One Young World Summit is an ideal platform for driving change and development, and we hope to do this for education in Johannesburg, as education is key to the future of our youth,” says Tau.

“Johannesburg is an exceptionally youthful city,” he adds. Half the city’s population is under the age of 34, and about 42% younger than 24. “This has the potential to create a very dynamic and vibrant society with a strong emphasis on innovation, enterprise and creativity.

“We firmly believe in planning with people – not for them. The youth of our city is a critical constituency, and we are constantly refining our efforts to engage them in planning processes.”

Founded by David Jones, Global CEO of Havas, and Kate Robertson, UK Group chair of Havas Worldwide, the annual One Young World Summit is a unique event that offers international decision makers powerful insight into where our world may be heading.

After the summit, One Young World ambassadors will report back to their countries and communities on the insights and progress made at the event.