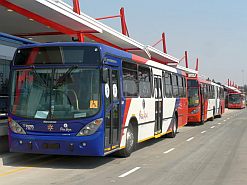 The fuel-efficient Rea Vaya bus rapid transport (BRT) system, launched in on 30 August 2009, is set to change the lives of South African commuters while doing its bit for a greener environment.

Although the media focus has been largely on the ruffled feathers and strident protests of the minibus taxi industry, which fears major job losses, the benefits of Rea Vaya (seSotho, meaning “we are going”) far outweigh the perceived drawbacks.

Rea Vaya is part of ’s Integrated Transport Plan, an initiative to raise the standard of the city’s public transport to fall in line with the global standard.

The system is a first not only for the country, but also for the Southern African region. Meanwhile, Cape Town, Tshwane and Port Elizabeth are implementing their own BRT systems.

With the 2010 Fifa World Cup mere months away, the four cities, which all host a number of games, are ensuring that visitors will be able to get around quickly and easily.

Not only will South African commuters now have a choice of transport to work, but the effects on the environment are not to be underestimated.

In the short term the benefits include efficient and accessible service, affordable fares and easier traffic conditions. Medium term benefits include job creation and enhanced social interaction for those who up till now have had no way of getting around, and in the long term Rea Vaya will contribute to economic development as well as reduced pollution and a better quality of life.

All of these factors add up to the development of a world-class public transport system.

Described by the City of as the largest individual climate-change initiative ever undertaken by city management, Rea Vaya’s buses have efficient engines that run on low-sulphur fuel and emit less nitrous oxide and particulate matter, one of the primary causes of air pollution.

According to Rea Vaya, if just 15% of people who would normally use their cars to get into the city switch to BRT, this will save a massive 382 940 tons of carbon dioxide emissions by 2010, and an incredible 1.6-million tons a decade later.

And hard-pressed drivers will feel the relief in the form of less traffic congestion.

Speaking at a public transport summit held in August 2009, ’s executive mayor Amos Masondo said that 47% of commuters travelled by public transport. This figure is further broken down into 72% travelling by minibus taxi, 14% by train, and 9% by bus.

Rea Vaya is to be rolled out in three stages. Phase 1A, spanning 25.5km, is currently underway and is expected to be complete at the beginning of 2010. There are 40 smart red and blue buses currently operating but by completion of the initial phase, all 143 will be on the roads.

The trunk routes feature the largest buses, articulated and able to carry 112 passengers each. These vehicles will travel only in the dedicated bus lanes and will stop at the Rea Vaya stations.

Complementary buses have a capacity of up to 75 passengers and will be able to pick up passengers not only from Rea Vaya stations, but also from bus stops on the pavement.

The feeder buses, with a capacity of 32 passengers, will bring commuters to the trunk routes from outlying areas. All buses are wheelchair-friendly.

With the system running between 5am and midnight, passengers will be able to catch a bus every three minutes in peak times and every 10 minutes during off-peak periods.

For those worried about the infamous tardiness of buses the world over, it may help to know Rea Vaya has an on-board global positioning system that will keep vehicles to a tight schedule by monitoring the exact position of a bus and advising the driver to slow down or speed up where necessary.

The initial service runs just over 25km, from Lakeview station in Soweto, to Ellis Park station in the city. Tickets cost between R3 and R8 a trip.

Latest reports show that the system is running smoothly despite taxi demonstrations and the occasional teething problem. Rea Vaya is carrying an average of 8 000 passengers per day, after an initial surge of almost 17 000 passengers on day one, as a result of a taxi strike.

Ultimately it is envisioned that taxi operators will make up the bulk of the planned bus operating company that will own and manage Rea Vaya.

And the commuter will come out tops, as the notoriously dangerous and unreliable taxi sector and other public transport operators will have to raise their game to compete with the new system and woo their customers with good service rather than complacency in knowing passengers lack an alternative.

Rea Vaya is designed to blend with other forms of transport, such as the Gautrain rapid rail system. Combined bus stations and taxi ranks will facilitate passenger transfers between the two.

Gautrain is currently in an advanced state of construction, with stations and viaduct construction well under way. The rapid rail system has also not been without its controversy, notably because of its high construction cost and probable targeting of middle class passengers, but many agree that the benefits outweigh the disadvantages.

Gautrain is expected to bring economic growth to the province through job creation, less traffic congestion and stress, and a reduction in costs of road accidents and the accompanying loss of productivity.

It will also bring added convenience and reliability for commuters, as well as a far lower carbon footprint than the thousands of vehicles that jostle for position on the overburdened freeways between and every day. The expected saving in carbon emissions is around 70 000 tons per year.

The first Gautrain section expected for completion is the route between OR Tambo International Airport and the Sandton station, north of . According to the latest progress report, construction all along this route is going well. All eleven bridges are nearing completion, while work on the three viaducts is essentially complete.

With Metrorail’s Tshwane Business express – a service launched between Johannesburg and Pretoria in May 2008 and now running a second train – the Gautrain, the BRT, Metrobus, and taxis, commuters will have ample choice in their modes of transport.

’s RideSmart campaign is also up and running – this is an initiative that encourages people to share rides. Drivers or passengers enter their names into a database and are automatically matched by the programme with others in their area.

A further initiative that will ultimately ease traffic congestion is the Gauteng Freeway Improvement Project, which is upgrading and widening the province’s network of freeways, and introducing an electronic toll-collection system.