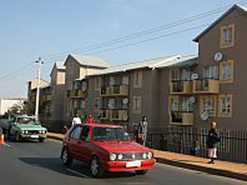 This project in Kliptown, Soweto, is one
of 2.3-million funded by the government.
(Image: Bongani Nkosi)

South Africa is now looking into alternative and innovative building materials to address backlogs in social housing delivery, and also to improve the quality of its products.

The Department of Human Settlements hosted an indaba on 29 and 30 September in Sandton, Johannesburg, to explore new technologies that could be used for its building projects. The indaba, attended by leading business executives and research academics, was meant to find “new ideas” that are “concrete and implementable”, the department’s minister Tokyo Sexwale said.

The department is addressing various faults in a number of social housing projects across the country.  It has bulldozed shoddily built houses, spending billions of rands on rebuilding them.

Demolishing started in the Eastern Cape in November 2009 where about 20 000 defective houses were flattened. The department also set aside R2-billion (US$287-million) to investigate “dodgy contractors” involved in corruption.

As a result of inferior work, officials are forced to do comprehensive inspections on a number of ongoing projects, which is a waste of time, according to the director-general Thabane Zulu.

“We should do things right from the start,” Zulu said, adding that there are extensive backlogs.

The indaba saw more than 100 companies exhibiting innovative building technologies and new approaches to building. They included construction companies and developers in areas such as sanitation and solar energy.

“We have to apply new technologies to build better homes,” Sexwale said.

The government is looking at reasonably priced products of quality. “As we look for solutions, we should also be looking at their cost-effectiveness – searching for cheaper materials, but not compromising on quality,” said Sexwale. “The poorest of the poor deserve much better.”

Independent assessment company Agrément South Africa certified the product in June 2010, and Cook said they will start a project in the Eastern Cape in six weeks.

It’s cheap and durable, and a house can be extended using bricks though it’s built of concrete and steel, according to Cook.

“Our quality is guaranteed.  In 20 years’ time a gogo [grandmother] in Phalaborwa can get a bricklayer to extend her house. I heard they are demolishing because of poor quality – but you can never demolish this.”

“Our focus for social housing is lighting,” he said.

The market for solar energy in South Africa is still “very tight” and the indaba was a “move in the right direction by the government” towards promoting the technology, Ahmed said. Ezylight has been nominated for the 2010 eta Awards, which recognise excellence in innovation and use of efficient energy.

Since coming to power in 1994, the incumbent government has built more than 2.3-million subsidised houses, according to Sexwale. “We’ve been building houses. This government has done better.”