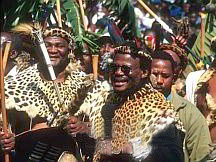 The recently formed National Freedom Party (NFP), a breakaway from the Inkatha Freedom Party (IFP), hopes to draw in South Africans who’ve grown weary of racial battles among other political groups in the country.

The party was officially launched at the Durban City Hall in KwaZulu-Natal on 25 January 2011.

Recently dismissed IFP national chairperson Zanele Magwaza-Msibi was elected by her supporters to be the leader of the NFP.

Msibi had in the past been eyed as the next leader of the IFP, although its long-running president Mangosuthu Buthelezi has said that he will not be stepping down anytime soon.

“I never thought that in my wildest dreams that I would ever stand in front of you and make this pronouncement about leaving the IFP, the party I have dedicated my entire life to serve,” Msibi said at the NFP launch.

The NFP has already been registered with the Independent Electoral Commission (IEC) and intends contesting the upcoming local government elections.

“The NFP is a home to all South Africans, irrespective of their race, colour or creed. It is a home for the majority of our people who found themselves caught up in the racial battles of many parties in South Africa,” Msibi added.

The party believes it will gain significant support from Zululand District Municipality’s Ulundi and Nongoma regions in the polls later this year.

“We will win in Zululand because we have worked very hard there. In May, after local government elections, I will be the mayor of Zululand,” Msibi said.

A rift within the IFP has existed since 2009 with members’ loyalties divided between Msibi and Buthelezi.

Msibi’s faction has been in a tug-of-war with Buthelezi supporters and recently went to court to prevent an inquiry against her. If this intervention had been successful, it could have prevented her expulsion from the party.

Msibi lost her fight in early January 2011 after the Pietermaritzburg High Court dismissed her application to order the IFP to hold an elective conference, and to prevent it from subjecting her to a disciplinary inquiry.

After the court dismissal, IFP secretary-general Musa Zondi said: “We have been vindicated. We have never had any doubt that the court would dismiss the applications brought against us … since the grounds for these applications carried no substance.

“Our immediate goal today is to start recovering the lost ground ahead of the 2011 local government elections and contest these elections as one organisation with one leader,” added Zondi.

But Msibi was already hinting at a split: “We will never regain the relationship we once had with the leadership of the IFP. We have to accept the court’s decision and move forward as the party has shown that they no longer want me and my supporters in their fold.

“The president (Mangosuthu Buthelezi) made it clear that there will never be reconciliation between us and therefore if one door closes, other doors open. We will be there in the local government elections and we are capable of doing anything,” she added.

Although Msibi lost her place within the IFP, she praised Buthelezi as her mentor: “He groomed me and I have no qualms with him, but now we need to let bygones be bygones.”

Mangosuthu Buthelezi founded the IFP in 1975 and has been its president ever since. He is a former member of the African National Congress (ANC) Youth League, which he joined while studying at Fort Hare University in the Eastern Cape.

The IFP and ANC had been bitter rivals since the 1980s, but after the first democratic elections in 1994 the relationship eased somewhat and the two parties formed a coalition in KwaZulu-Natal – the IFP’s stronghold.

The IFP has 18 seats in the National Assembly and largely draws its support from isiZulu-speaking South Africans. The IFP strongly supports traditional leadership structures.

Buthelezi plays an advisory role in the government as the head of KwaZulu-Natal’s House of Traditional Leaders.