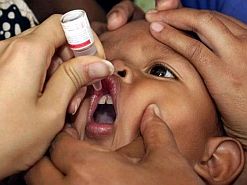 More than 85 million children under the
age of five in West and Central Africa will
receive polio vaccinations.
(Image: www.academic.sun.ac.za)

A massive campaign to eradicate a year-long polio epidemic in West and Central Africa kicked off on 6 March, according to global health bodies.

The organisations, joining forces as the Global Polio Eradication Initiative (GPEI), are hoping to immunise more than 85-million children under the age of five in 19 West and Central African countries. GPEI includes governments, the World Health Organisation (WHO), Rotary International, the US Centres for Disease Control and Prevention and Unicef.

Vaccinations in Niger, Togo and Cote d’Ivoire will be done at a later date due to impending elections in those states.

The scope of the new campaign is significant because previous attempts in 2009 failed to reach enough children, and so the outbreak persisted.

Over 400 000 volunteers and health workers from different organisations have been called on to administer two drops of the oral polio vaccine (OPV) to each child in the 19 countries on 6 March. The “dedicated army” will work for about 12 hours flat, going to every household on either foot, bicycle, car, boat or motorcycle.

“With better coverage that leaves no child unvaccinated, these campaigns can succeed in making West and Central Africa polio-free,” Unicef regional director Dr Gianfranco Rotigliano said in a statement released on 4 March.

Vaccinations will be repeated in the 19 countries on 24 April, but children in Burkina Faso, Guinea, Liberia, Mauritania, Senegal and Sierra Leone – where the recent outbreaks have occurred – will receive an additional dose on 26 March as part of a new Short Interval Additional Dose strategy “that has proven successful in rapidly building population immunity where needed”, according to Unicef.

The new campaign is an aspect of an ongoing initiative to fight the epidemic that broke out in Nigeria in 2008. It then spread to its neighbouring countries, which were previously polio-free, and to Central Africa, said GPEI.

After battling to contain the spread, health organisations, working with health ministries in the affected countries, introduced new approaches which include a scheme to monitor how many children have been reached, better training for vaccinators and appropriate use of experienced staff.

Dr Luis Gomes Sambo, WHO regional director for Africa, said the campaign shows Africa’s determination to be free of polio. “From the top leadership to local district administrators in every country we are each accountable to the African child. [We have] to vaccinate every child and achieve high coverage.”

Rotary International, which boasts about 1.2-million volunteers worldwide, has donated US$30-million (R223-million) to fund the campaign.

“We are proud to have provided the funding necessary for the March rounds and we call on others to play their part in making Africa polio-free by providing funding necessary for more high-coverage campaigns,” said Ambroise Tshimbalanga-Kasongo, who chairs the organisation’s Africa Regional PolioPlus Committee.