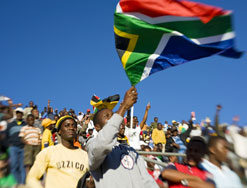 The Lead SA campaign aims to build on
national pride, already boosted by the
success of the 2010 Fifa World Cup, to
change the country for the better.
(Image: MediaClubsouthafrica.com. For more
free photos, visit the image library)

The campaign, which was launched in early August, is to take advantage of the spirit of ubuntu that helped make the 2010 Fifa World Cup such a resounding success.

It calls on South Africans to keep the sense of goodwill alive in their communities and become leaders for change.

During a recent panel discussion at Wits Business School, which focused on aspects of the legacy of the World Cup, Gillian Saunders, director of consulting firm Grant Thornton, spoke of the increased national pride and a new can-do attitude shown by South Africans.

The country is still on a high, and there has never been a better time to harness that positivity and turn it towards improving circumstances in South Africa.

For many, especially those in rural areas, the World Cup was an indirect experience, in many cases hardly felt as people were far from major cities and stadiums. But the new campaign is hoping to spread the ubuntu vibe beyond the cities so that it may touch every citizen.

The World Cup proved what South Africans are capable of, if they work with a common vision. Lead SA aims to remind citizens that it is within their power to take the initiative to change themselves and their country.

Initial reaction to the campaign has been enthusiastic, with South Africans taking up the cause on radio, via e-mail and on social media sites.

Primedia Broadcasting CEO Terry Volkwyn said the country has overcome some tough obstacles, in its history and in recent times. However, many South Africans have achieved great things over the years, and people must focus their attention on the actions that have been done for good, and not on the deeds of a lawless few.

“Some of these trials may have produced miracles beyond imagination,” said Volkwyn, “but they have also robbed us of some our basic moral values”.

Volkwyn added that it was easy to complain and dwell on the problems facing the nation, rather than taking action. It was easy to blame the government or community leaders for South Africa’s ills, rather than having the courage to make a difference.

South Africa’s achievements took centre stage for the month of the World Cup, and the world praised the country, not only for being such an excellent host but also for overcoming challenges that might have daunted another nation. South Africans, said Lead SA’s call to action, have forgotten how far they’ve come and what they’ve accomplished.

The campaign is appealing to people to remember that their behaviour serves as an example to others, and that positive action will have an immediate effect. Respect for the law of the land and compassion for fellow citizens, no matter what their station in life, is key to sustaining the positive vibe.

“As a media group, it is our obligation to unlock the leadership potential in this country,” said Volkwyn. “If we are to take our rightful place on the world stage and make this country the success that it deserves to be, each of us must stand up and do something.”

Lead SA encourages South Africans to stand up for positive issues – doing the right thing, upholding the law, showing compassion and respect to others, and taking care of the environment.

The campaign focuses on five areas which it has identified as key to the advancement of South Africa and its people. These include moral leadership and working for good; public leadership, not just by those with a platform but by all; and the education of the nation.

The campaign also strives for the success of the Square Kilometre Array, which will bring job creation and investment into technology; and the benefits of sport as a unifying force – the obvious example being the 2010 Fifa World Cup.

These are long-term goals that can’t be achieved in mere months, but will remain a focus of Lead SA in the years to come.

In the short term the campaign will highlight not only the contribution of notable leaders such as former president Nelson Mandela, but those of the unsung heroes whose actions might seem insignificant, but have touched somebody’s life. These real-life stories will inspire others to do the same.

The campaign will also expose behaviour that destabilises the country, and will hold people accountable, especially individuals in positions of power.