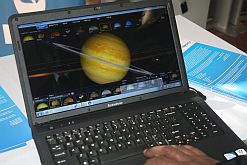 Broadband Infraco, the state-owned ICT enterprise formed in 2006, will introduce its long-awaited internet services to the South African market in November 2010.

“We’re launching our broadband capacity network,” said Infraco’s account manager Charmaine Fredericks in an interview on the sidelines of the My Broadband conference in Midrand on 20 October.

The parastatal will now have access to an approximately 12 125km fibre-optic cable and other telecommunications infrastructure, which have been used exclusively by Neotel over the past four years.

The infrastructure is owned by the government due to it being laid by state-owned enterprises Eskom and Transtel. It has since been transferred to Infraco, but Infraco couldn’t use it as Neotel was the sole licensee.

“We’ve had the network for the last four years, but we couldn’t operate on it. We got our operational licence last year from Icasa,” said Fredericks.

“Neotel’s role as the network’s sole custodian comes to an end soon and that’s why we’re launching. We can now go commercial and bring customers on board,” she added.

Infraco has been improving the network’s infrastructure over the last four years, while Neotel has maintained the existing system, according to Fredericks.

The network’s services now also cover the border areas of South Africa. “The network is quite a lot bigger than what we had when Neotel started,” said Fredericks.

A new connection ring has been included, meaning “when one ring fails, we connect to another so that traffic is not disturbed”.

“There’s a lot that we’ve done in the past five years to prepare us for our day of launch,” Fredericks added.

The Department of Trade and Industry owns 74% of the national broadband utility, while the Industrial Development Corporation (IDC) owns the other 26%. The IDC is also a state entity.

As a broadband wholesaler, Infraco will not offer services directly to end-user customers, but rather to internet service providers. “Our aim is to be the wholesale provider of choice to our customers,” CEO David Smith said at the My Broadband conference.

It’s an open-access service provider which will enable the government to offer nation-wide connectivity at a lower cost and lead to investments in building the country’s long-distance fibre-optic networks.

Infraco’s primary mandate is to get providers to cover areas in South Africa that are currently not served or underserved. “We want to become a carrier of carriers,” said Fredericks.

It has set up a number of broadband Points of Presence (POPs) across the country, which are now connected to the national network. The POPs include various small towns and rural areas like Ermelo, Mahamba Border, Beit Bridge, Newcastle, Onseepkans and Zimbane.

According to Fredericks, the government has identified 37 such places where connectivity must be fast-tracked. “We will provide connectivity from the closest POP in that underserved area.

“Then we’ll be looking for partnerships with internet service providers, like Internet Solutions or iBurst, to service the areas,” Fredericks said.

“We are trying to get as many providers as possible into the network, so that connectivity prices can come down,” she added.

Broadband Infraco’s network services will receive a major boost when the West Africa Cable System (WACS) it has invested in comes on stream.

WACS will land in Yzerfontein along the Western Cape coast and is expected to go live by July 2011.

The much-anticipated marine cable will connect South Africa directly with the UK, and will have landing stations in Portugal and along the coastlines of various West African countries.

“WACS will be massive. Major operators like MTN and Vodacom have also invested in WACS,” Fredericks said.