Winnie Madikizela-Mandela’s recent book, 491 Days, Prisoner number 1323/69 gives graphic insight into what the apartheid government subjected her and others to in the 1960s and 70s. 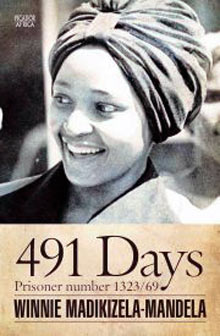 Winnie Madikizela-Mandela’s recent book gives graphic insight into what the apartheid government subjected her and others to in the 1960s and 70s.Despite her strength of mind and fierce fighting spirit, she became extremely ill during her 491-day stay in prison, the result of long months of solitary confinement and the poor diet, which often consisted of porridge with maggots in it. She suffered with chest pain, palpitations, body spasms, haemorrhaging, loss of appetite and chronic weight loss. She even contemplated suicide.

She felt particularly close to her jailed husband Nelson. In a letter dated 26 October 1970 after her release she wrote:  “In a way during the past two years I felt so close to you. It was the first time we were together in similar surroundings for that length of time. Eating what you were eating and sleeping on what you sleep on gave me that psychological satisfaction of being with you.”

Nelson was of course on Robben Island, where he’d been since 1964, after being convicted with seven others of sabotage in the Rivonia Trial. He was 52 years old at the time. Winnie was 36 years old, and had experienced many spells in detention, but the longest was 491 days. She had been picked up in May 1969, and spent the next 16 months in jail.

Her prison experience brought them even closer . He wrote to her in June 1970: “During the 8 lonely years I have spent behind bars I sometimes wish we were born the same hour, grown up together and spent every minute of our lives in each other’s company. I sincerely believe that had this been the case I would have been a wise man.” He had spent several years prior to the Rivonia Trial in prison too.

A wise man. And a combative spirit, still evident in her today. They both gave their souls and their love to the struggle.