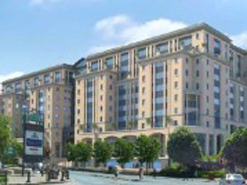 South African banking group Nedbank announced in July 2010 that it has achieved carbon neutrality – becoming the first bank in Africa to do so.

The group’s chief executive Mike Brown made the announcement at the Nedbank head office in Sandton, in Johannesburg’s northern suburbs.

“This achievement sees us following through on the commitment we made in September 2009 to completely offset our carbon footprint,” said Brown. “As our group executive of enterprise, governance and compliance, Selby Baqwa, likes to say: there is no Planet B.”

Nedbank is now green not only in corporate colour, but also in deed. Brown said that it made sound business sense to go green, but was also very much the right thing to do.

“As a large business we have to strike a balance between economic, social, cultural and environmental issues,” he said. “An overt focus on one area can be successful only in the short term. In order to achieve sustainable returns, all of Nedbank’s interdependent parts must be in balance.”

The mammoth achievement involved not only the group head office, but all the regional buildings as well as some 500 branches and kiosks across the country. It also took the support of 90% of the staff, who were equipped with the knowledge and tools to make a difference at the office, and then to apply the concept in their own homes.

Phase Two of Nedbank’s head office, now complete, is the first four-star green-rated commercial building in the country. It’s been certified by the Green Building Council of South Africa and operates 30% more efficiently than a normal building.

The Nedbank group made the commitment to go green as many as 25 years ago, determined to make a positive impact on the communities it serves and set an example for its customers and suppliers in the process.

Brown believes that the bank’s integrated approach was the key to achieving a zero carbon footprint.

“We didn’t achieve it merely by going out and buying up carbon credits, but by a genuine and substantial reduction in our carbon footprint. We started by measuring our impact on the environment – this process was initiated back in 2007 – and now we have a robust measuring system in place.”

To ensure integrity in the measuring process and set up the required framework, the bank’s carbon neutral task team worked closely with the local chapter of the World Wide Fund for Nature (WWF), Brown said.

“The support from the bank’s leadership is particularly encouraging,” said Richard Worthington of the WWF, “and it has contributed to the bank’s success in its green endeavours. Business and industry in South Africa is generally not doing well in this sphere, and we appreciate Nedbank’s role in setting the pace for others to follow.”

Once an accurate measurement had been recorded and then verified by Ernst & Young, a target was set in terms of behaviour change; more efficient operation; and cutting down on paper, electricity, water, travel and waste.

“Once we had achieved those reductions that we’d committed to, we offset the remaining unavoidable greenhouse gas emissions, around 213 000 tons, with carbon credits.”

After much research, the bank settled on the sustainable Rukinga project in Kenya to obtain its carbon credits. Rukinga is Africa’s first large-scale gold level-accredited Reduced Emissions from Deforestation and Degradation initiative.

“We took great care in choosing our beneficiary,” said Brown. “We analysed projects involving biodiversity, renewable energy, and the reduction of deforestation. Unfortunately we couldn’t find a suitable project in South Africa, but other projects have sprung up in the meantime and in the future we’ll be able to secure a more diverse portfolio here at home and elsewhere in Africa.”

The Rukinga initiative, situated on 75 000 acres of land in the Kasigau Corridor, focuses on reducing deforestation and degradation of wildlife habitats, eliminating about 3.5-million tons of carbon dioxide emissions, and providing residents with a conservation-related income.

The community has benefited richly from its Climate Community and Biodiversity Alliance-approved programme, receiving 18 new classrooms, a boost to its citrus industry, and better healthcare. A large amount of land was reclaimed for wildlife and numerous jobs were created.

A journey of many steps

Nedbank’s achievement of carbon neutrality took many steps, both big and small. It involved the extensive use of compact fluorescent lamps and motion-controlled lighting, turning off appliances when not in use, encouraging employees to use the stairs and not the lifts, using biodegradable cleaning materials, and installing water filters on taps instead of supplying bottled water.

In addition, the bank only uses environment-friendly paper and recycles as much as it can. In 2009 it recycled 124 tons of paper and 34 tons of other waste.

“The electricity we saved during 2009 could power 317 houses,” said Brown.

Video- and teleconferencing helped to cut down on travel costs, resulting in a 30% reduction in the number of flights taken by Nedbank employees during 2009 and a 34% reduction in car rental.

“We are also flexible with working hours and don’t mind if our people want to work from home from time to time – this has saved about 3.5-million kilometres of travel.”

In total, said Brown, the bank saved R28-million (US$3.7-million) during 2009. This figure contrasts favourably with the R2-million ($264 398) spent on putting the measuring and monitoring system into place, and the R12-million ($1.6-million) spent on carbon credits.

“This is not the end,” said Brown. “Rather, it marks the beginning of an ongoing process in greenhouse gas reduction. We aim to address the issue of water conservation in South Africa, as this is a key sustainability issue for us.”

Nedbank is also already working on a number of innovative green retail products for its clients. The bank intends to use its leadership position to encourage all corporates in South Africa to operate in a responsible manner and play their part in mitigating climate change.