South Africa’s 16 Days of Activism for No Violence against Women and Children was launched at Reiger Park in Boksburg on 25 November. Read the full text of President Jacob Zuma’s speech at the launch.

Each year, South Africa marks the campaign of 16 Days of Activism for No Violence against Women and Children between 25 November and 10 December.

This year the campaign will be held under the theme: Count Me In: Together Moving a Non-Violent South Africa forward.

This year’s 16 Days Campaign is important because we commemorate many milestones. The year 2014 marks 60 years since the signing of the Women’s Charter on 17 April 1954 in Johannesburg.

We are also marking 20 years of freedom and democracy in South Africa, as well as 16 years of the 16 Days Campaign.

The ANC government adopted the 16 Days Campaign in 1998 as one of the intervention strategies towards creating a society free of violence. The campaign has since grown and attracts people from all walks of life. We are all united by the objective of building safer communities for women and children.

One of the key achievements of freedom and democracy is the Constitution of the Republic. The Constitution contains a Bill of Rights which promotes human dignity and equality, including gender equality, and the advancement of human rights and freedoms.

The constitutional vision of equality, which incorporates redressing gender and other imbalances, is taken forward in the legislation that promotes equality.

This legislation includes amongst others:

In this regard, this country has the right policies and legal framework to protect women and children.

However, despite this wonderful Constitution and very good laws, the scourge of violence against women and children continues.

The violence takes different forms. It includes sexual harassment, abuse, assault, rape and “corrective” rape, domestic violence and other cultural practices that are harmful to women and children.

We have had tragic cases of women being brutally killed by their partners or husbands or serial killers.

There have also been tragic and horrific cases of children being attacked and killed, such as the little girls from Diepsloot, Anelisa Mkhonto, and cousins Zandile and Yonelisa Mali. Right here in Reiger Park, little Taegrin Morris was also brutally killed by alleged car hijackers. There are others cases here as well and around the country.

Premier Makhura has assured me that the Provincial Task Team that is working on the Morris case is doing everything possible to find the perpetrators of this cruel act.

We know the pain that this incident caused.

We share the pain of the loss of all children in this community and in the country as a whole.

This campaign is aimed at highlighting all these forms of abuse and violence and to say enough is enough.

As we mark 20 years of freedom and democracy, let us today make a commitment to work together harder than ever before, make South Africa free of violence against women and children.

Working together we want to bring an end to the attacks on women and children.

Working together we want South Africa to be safer for women and children.

This year, we are reaching out to men and boys. We encourage greater participation of men in the campaign of preventing violence against women and children.

We urge young men and boys as well to commit themselves to become activists against gender based violence.

We are focusing our message on men as well not because South African men are abusive. It is because excluding men from participating actively in this campaign has been a serious shortcoming. Men also have solutions to offer in fighting violence against women and children.

As we move forward together, we should remind those suffering abuse and violence that silence must end. Women and children who are victims of abuse must speak out.

We also remind women and children that nobody should make them feel guilty for speaking out, even if the perpetrator is a family member. Children in particular need particular care and assistance so that they can speak out and end the abuse.

Today we also want to send a clear message to the public. Abusers, murderers and rapists have no place in our communities.

We must work with the police and the courts to ensure that these criminals are arrested and convicted of crimes against women and children.

All cases of abuse, in both rural and urban areas must be reported to the authorities and police for immediate action.

And indeed the police and the courts are making progress in fighting this scourge, with the support of communities.

The number of perpetrators receiving life sentences for violence against women and children has been increasing. In the financial year 2010/11, two hundred and ninety nine perpetrators were sentenced to life imprisonment.

In the 2011/12 financial year, the number of perpetrators sentenced to life rose to three hundred and eighty nine.

These numbers have been steadily increasing to an extent that in the current financial year, we have six hundred and forty five perpetrators serving life terms for committing similar deeds.

In total, one thousand eight hundred and thirty two (1 832) criminals have been sentenced to life imprisonment since the year 2010.

Over and above these there are many others serving lengthy jail sentences.

We thank members of the community for their contribution to this success rate. Most perpetrators are arrested and convicted because people report these cases, and also, they come forward as witnesses.

We also thank women for their resilience.

It is not easy to go through the court process for women survivors, to face the perpetrator again. But many do so and give many other women strength.

As part of our commitment to fight this scourge, the re-establishment of Sexual Offences Courts continues to be prioritised.

Since inception in August 2013 to date, 31 regional courts have been upgraded into sexual offences courtrooms compliant with the new Sexual Offences Courts Model.

Through these specialised courts, government intends to reduce the secondary trauma often suffered by the victims.

The courts are also intended to reduce the turnaround time in the finalization of cases, to improve the performance of witnesses, increase the conviction rate and most importantly, contribute to the reduction of repeat offences.

We believe we are making progress as government in the fight against this scourge. But much more needs to be done. And most of the work requires the support of communities.

To protect children, we need the support of families and parents in particular. Irresponsible parents and guardians who leave young children unattended and vulnerable to abuse are as guilty as those who commit the crime.

We must unite against irresponsible social behaviour and practices.

Another contribution that we need from communities is to deepen the fight against alcohol and illegal substance abuse.

Alcohol and drug abuse are some of the key root causes of domestic violence, children born with disabilities, abuse, rape and killings. Let us work together to isolate drug dealers and illegal alcohol outlet owners. They must be reported to the police. They should have no place in our communities.

The start of the 16 days campaign coincides with United Nations’ International Day for the Elimination of Violence against Women. This campaign also ends on an important day, 10 December which is International Human Rights Day.

While the international campaign is marked for 16 days, we urge all South Africans to ensure that this becomes a campaign for all 365 days of the year.

We have a vision of a society where we no longer read or hear about the abuse that some women and children suffer at the hands of heartless perpetrators.

We are building a society where the women and children are safe at home, at school or at work.

We are building a society where children play safely outside and where women walk freely in the streets, without fear of attacks.

This is the society that the 16 Days of Activism for No Violence against Women and Children hopes to achieve.

That society is achievable if we work together.

We appreciate the collaboration between Government and Non-Governmental Organisations, Community Based Organizations, faith-based organizations, traditional leadership and healers as well as the business sector in making everyday a safe and violence free day.

We call for more partners to implement a more effective and rigorous plan of the 365 Days National Action Plan.

Let us make the theme of this year come alive. Let us work together, moving a non-violent South Africa forward. 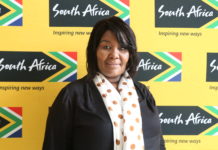