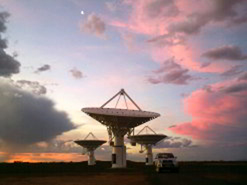 South Africa’s MeerKAT radio telescope is scheduled to become operational only in five years’ time, but scientists from around the world are lining up to book research time at the facility.

More than 43 000 hours have already been allocated to interested radio astronomers, who were invited to submit their proposals in October 2009. This amounts to more than five years’ worth of observing time.

A total of 21 proposals involving over 500 astronomers, 59 of them from Africa, were received. All proposals were carefully considered and rated by a committee of local and international experts.

According to SKA, the most highly rated projects were a survey of radio pulsars, and two proposals to study neutral hydrogen gas in the deep universe. The first received 8 000 hours and the hydrogen gas proposals received 5 000 hours jointly.

Eight other proposals, including a survey of the nearby (65-million light years away) Fornax galaxy cluster and a high frequency survey of the galactic plane, were allocated time ranging from 1 950 hours to 6 500 hours.

Besides the ten approved projects, said SKA director Dr Bernie Fanaroff, the team is keen to use MeerKAT in the ongoing search for extraterrestrial intelligence as well as collaborating with Nasa in downloading data from that organisation’s space probes which are exploring other planets.

The successful teams are expected to collaborate with MeerKAT staff on the design phase of the telescope and to help build human capacity.

The MeerKAT is the precursor to the Square Kilometre Array (SKA), funded by the Department of Science and Technology.

At around 100 times more sensitive than any comparable existing facility, this giant radio telescope will be the most powerful ever built. Consisting of about 3 000 parabolic antennae with a total collecting area of around 100ha, or a square kilometre, SKA will construct images of the universe from radio waves, instead of light waves.

South Africa and Australia are in the race for the privilege of hosting this key scientific facility, with the winning nation to be announced in late 2011 or early 2012.

In South Africa all construction is taking place near the small town of Carnarvon in the Karoo, Northern Cape province. Here the climate is dry and there is minimal light pollution and radio interference, and with little commercial activity the area is expected to remain quiet in years to come.

Spanning a vast area of Southern Africa, the SKA will consist of a core and five spiral arms, each containing increasingly remote stations of about 30 dishes each. The outermost stations will spill over into neighbouring countries such as Namibia, Botswana, Mozambique, and Zambia.

The SKA will send information via the data processing station on site to its control centre in Cape Town, over a high speed data network.

MeerKAT has its own precursor, the Karoo Array Telescope or KAT-7, which is already in place. KAT-7, also known as the MeerKAT Precursor Array, yielded its first images earlier in 2010 and is now fully online.

It consists of seven dishes which produce images using a technique known as radio interferometry – the production of high-resolution images using a cluster of smaller telescopes rather than one large instrument. The more telescopes in the cluster, the better the result. MeerKAT and SKA, too, will use this technique to probe deeply into the universe.

With KAT-7 up and running, the focus can now turn to MeerKAT, which will demonstrate South Africa’s technological capabilities for the SKA project.

Recently it was announced that MeerKAT will consist of 64 Gregorian offset antennae – named after the eminent 17th-century Scottish astronomer James Gregory – each with a diameter of 13.5m. According to Anita Loots, SKA Africa’s associate director, this configuration will allow MeerKAT to operate at a sensitivity of over 220 m²/K, making it one of the world’s most powerful radio telescopes in its own right.

The next step is to build a prototype dish of the new design, and test it against the existing format.