South Africa’s MeerKAT, the precursor to the Square Kilometre Array (SKA), has taken the first step towards completion – a concrete foundation for the first of what will eventually be a 64-antenna array was poured in mid-August, at the SKA site in the Northern Cape.

The remaining foundations will be poured over the next nine months, notes SKA’s website, and will be overseen by engineering company Brink & Heath Civils. Each foundation consists of 78 m³ of concrete and nine tons of reinforcing steel, and has to be robust enough to keep the sensitive radio antenna above it stable in winds that have been known to gust up to 140 km/h.

The SKA project in South Africa has received massive government support since it started around a decade ago, and the Department of Science and Technology (DST) will pour R2-billion (US$213-million) into SKA over the next three years.

MeerKAT is expected to be completed by 2016, said DST Minister Derek Hanekom, who announced the cash injection during his budget speech earlier this year.

The DST’s consistent support and commitment is one of the factors that led to South Africa being awarded the bigger hosting role for the SKA, after many months of tension and rivalry between the country and the other potential host, the Australia-New Zealand SKA Project. In May 2012 the long-awaited announcement came that South Africa would host about 65% of the instrument, with the balance going to the Australasian countries. 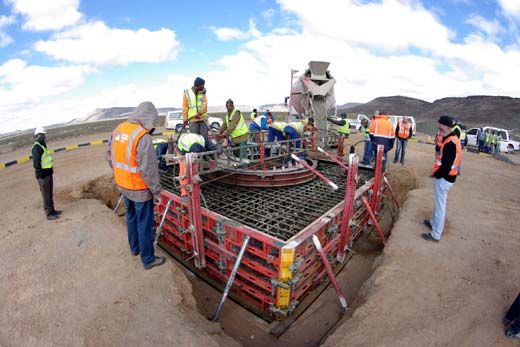 Built to withstand strong gusts of wind, each of MeerKAT’s antennas will stand firmly on a bed of concrete and steel. Image: SKA South Africa