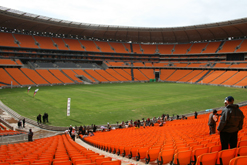 Argentinian national coach Diego Maradona sent a powerful message to the global football community during a recent visit to South Africa: “This will be a great World Cup, with no doubts of security.”

It came as a welcome remark in the aftermath of the fatal attack on Togo’s football squad in Angola on 8 January, which cast widespread uncertainty over the safety of the June-July tournament.

The Togolese team was in Angola to participate in the African Nations Cup, a 2010 Fifa World Cup forerunner, but they withdrew shortly after the incident.

“They can say what they want but we know we are coming to play the World Cup in a safe country,” Maradona said during an inspection tour of the Argentinian base camp in Pretoria.

“I have seen that with my own eyes. Anything can happen in the world, but I have spent a week in South Africa and everything is very good and the people very friendly.”

The star also visited schools in Soweto, South Africa’s largest township, in the south of Johannesburg, and other 2010 venues during his week-long trip.

“I will tell my players that they only have to think of playing football when they come here and worry about nothing else – this is the impression that I will take back to my country.”

On 21 January Maradona visited the almost-complete Soccer City stadium in Johannesburg, which will host the opening and closing World Cup matches. The former Footballer of the Year was visibly impressed by the flawless pitch and striking orange seating, which will be able to accommodate 97 400 fans.

“They really did a great job on this stadium. I have been to many stadiums before, but this is very big and so great. To be able to enter this stadium is so beautiful. I feel inspired to play here, but unfortunately my time has passed,” he said.

Construction workers, who had filled the venue’s upper rows to catch a glimpse of the football great, cheered and chanted: “Maradona! Maradona!” as he demonstrated his effortless ball skills.

Later the coach swapped signed national jerseys with Danny Jordaan, head of the 2010 Fifa World Cup local organising committee, and then broke away from the crowd to congratulate the workers on stadium.

“I think this visit by Maradona gives South Africans an insight into the excitement that will be generated by the World Cup,” Jordaan said.

“He didn’t go to any black tie events, he went into the townships where he said he felt safe, not threatened … he embraced people. Maradona’s contribution off the pitch has been very significant.”

After the coach left the stadium, Jordaan spoke to journalists about World Cup safety fears: “We ended with the final draw on 4 December, and the international visitors left. Now it’s the 21st January – and absolutely nothing has happened. The English cricket team was here, and they were very happy; and now Maradona’s come, and he’s also happy – that should speak for itself.”