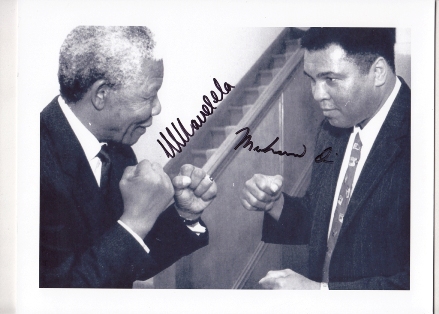 A signed photograph of Nelson Mandela and Muhammed Ali, sold as part of a lot of rare Mandela memorabilia at a recent auction.

A set of 79 photographs, memorabilia and documents signed by Nelson Mandela was bought at a recent auction for R950 000 by Anant Singh, the producer of the film Mandela: Long Walk to Freedom.

The assortment of 79 signed mementos at the rare auction dated from 1964 to 2010 and included the historic “I am prepared to die” speech Mandela delivered from the dock in 1964 during the Rivonia Trial that sent him to prison.

My favourite of all the things in the lot is the signed photograph of Mandela with boxer Muhammad Ali – the expression on Mandela’s face says it all, I reckon. Mandela’s signature is said to be the most valuable of any living figure.

“I think it’s a fair price. I think the seller got a good price, the buyer got a great price,” Alan Demby, president of auction house Stephan Welz & Co, is reported by AFP as saying. “It’s more about what [Mandela] represents than the actual items.”

“It’s not rare, it’s almost priceless. And I think that’s what makes it such a fascinating collection.” – Alan Demby, president of Stephan Welz & Co

The collection included a first-day cover from 10 May 1994, Mandela’s first day in office,  and a R5 inauguration coin. Also in the lot was a photograph of Mandela and Winnie entering a packed stadium in Soweto to address supporters after his release from jail in 1990, a 1988 concert pass for Mandela’s 70th birthday tribute at London’s Wembley Stadium, and a bottle of wine.