There are plenty of books about Nelson Mandela – written by himself, by people who knew him and by historians and journalists. Taken together, they tell a story of a life that towers above others, yet also reveal the more private experiences of the great man. 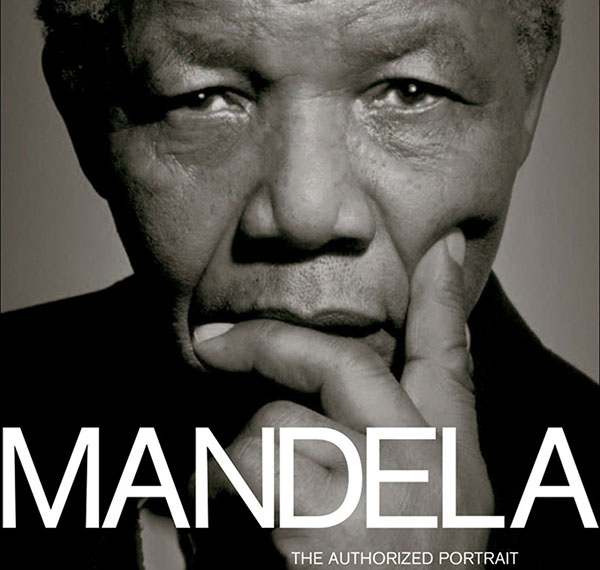 “Nelson Mandela: An Authorised Portrait” draws on extensive interviews with family members and other people of influence in Mandela’s life.(Images: Nelson Mandela Foundation)

While Nelson Mandela’s public persona is well-known worldwide, the man was also an enigma. What was it like in prison for 27 years? What made him the man of peace he became? For 27 years he disappeared from view, hidden away in prison by the apartheid government. The longer he stayed behind bars, the more curiosity about him grew.

It was no surprise, then, that the release of Madiba in 1990 triggered an avalanche of books, both authorised and unauthorised, documenting his life and speculating about events on Robben Island during those long years. Novels, biographies, autobiographies, children’s books and business books have been written since then – and his death will inevitably cause another flurry of publishing.

The most well-known book on Mandela is, of course, Long Walk to Freedom, his autobiography published in 1994, four years after his release. In 500-plus pages, Mandela tells the story of his experiences and how they helped shape him into the man he became. In his acknowledgements, he writes: “As readers will discover, this book has a long history. I began writing it clandestinely in 1974 during my imprisonment on Robben Island.”

He writes about his youth and being the foster son of a Thembu chief and how he had to negotiate both the world of his tradition and the reality of a white-dominated country. It tells of how he earned a scholarship to study law and chose to become a politician and human rights activist. It also documents the events that led him to join the African National Congress (ANC), his role in the creation of the ANC Youth League in 1944 and his presidency of the youth liberation movement in the 1950s. In his autobiography, he writes about the people who came into his life and what set him on the path towards becoming an icon of peace. 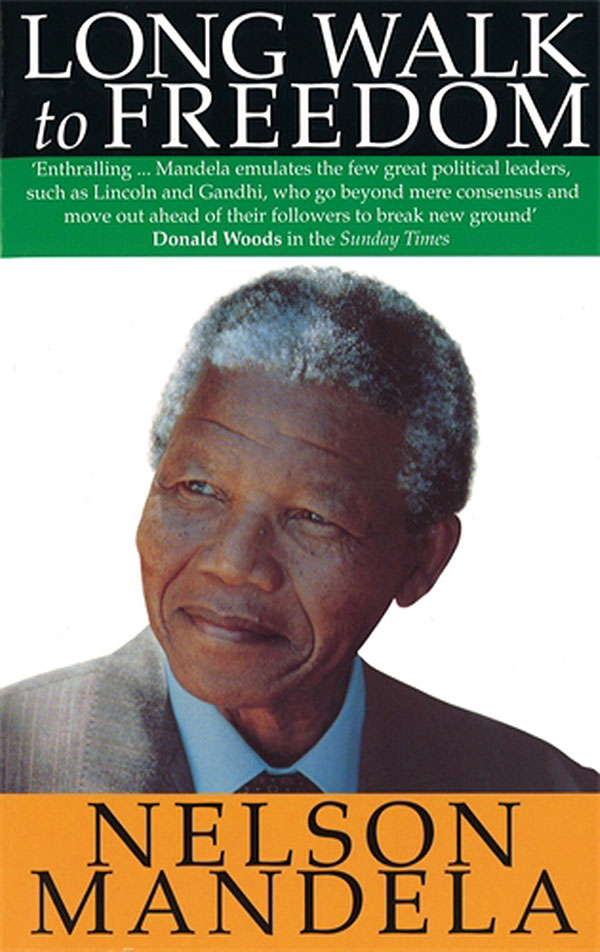 Mandela’s autobiography, “Long Walk to Freedom”, is the most popular book about the former president.

The reader is able to experience the Rivonia Trial of 1964 from the perspective of one of the men whose fate was decided by the events that took place in the trial. He gives you an idea of his time in prison, and writes about the negotiations that led to his release in 1990 and the beginnings of the rainbow nation.

Another book, The Struggle is My Life, is a collection of Mandela’s speeches and political writings from as far back as when he was the leader of the ANC Youth League to his release in 1990. For many, this book has been the only way to peer into the life of the man who suffered for his ideals and his people during the political turmoil in South Africa.

Authored by Mandela, the book contains some of the most moving and inspirational words to be spoken by the great man, including the famous statement from the dock in the Rivonia Trial, “I am prepared to die”, before sentencing began.

He ended that speech with the words: “During my lifetime I have dedicated myself to this struggle of the African people. I have fought against white domination, and I have fought against black domination. I have cherished the ideal of a democratic and free society in which all persons live together in harmony and with equal opportunities. It is an ideal which I hope to live for and to achieve. But if needs be, it is an ideal for which I am prepared to die.”

Another of Madiba’s well-known books is Conversations with Myself, published in 2010. The foreword is written by American President Barack Obama, and it is regarded by some as the most personal picture of South Africa’s former president yet. It contains bits and pieces of Madiba’s life, extracts from his diaries, calendars and letters as well as well as transcripts from recordings by Richard Stengel, the Time editor who collaborated with Mandela on his autobiography, during the writing of Long Walk to Freedom.

Conversations with Myself is a very intimate look into the life of Mandela and is told in a very raw way. It has no specific layout, much like life itself, and allows the reader to follow Mandela as he relives the trying times of his life, including health issues, dreams and political initiatives.

It gives a real portrait of the man. In it, he writes: “I love playing and chatting with children … feeding and putting them to bed with a little story, and being away from the family has troubled me throughout my life. I like relaxing at the house, reading quietly, taking in the sweet smell that comes from the pots, sitting around a table with the family and taking out my wife and children. When you can no longer enjoy these simple pleasures something valuable is taken away from your life and you feel it in your daily work.” 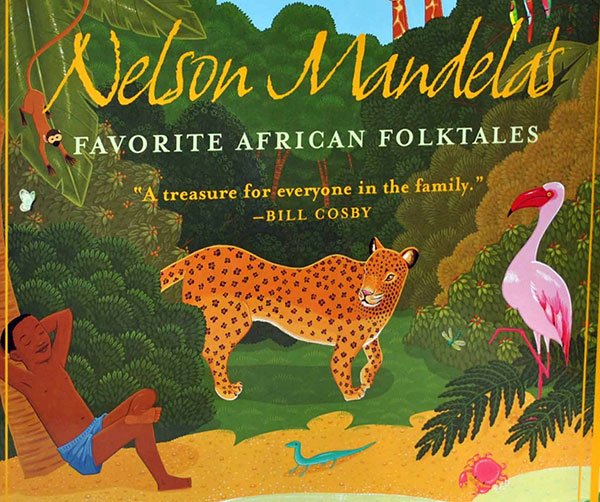 Mandela selected 32 indigenous stories from all over the African continent for the book “Nelson Mandela’s Favourite African Folktales”.

Mandela’s love for children – and his certain knowledge of the important role that the youth will play in shaping the future of South Africa – is no secret. It comes as no surprise, then, that among the myriad books that have been written by him and about him there are a few intended for an audience of a more tender age.

Among these are Nelson Mandela’s Favourite African Folktales and a children’s version of Long Walk to Freedom, which was abridged by author, novelist and poet Christopher van Wyk and illustrated by author and illustrator Paddy Bouma. The former, edited by Mandela himself, is a collection of 32 indigenous stories from all over the African continent, selected by Madiba for their beautiful portrayal of humanity.

An Authorized Biography by the late journalist Anthony Sampson is one of the few books about Mandela that touches on certain major events in his life, such as Winnie Mandela’s alleged crimes as well as former president FW de Klerk’s attempts to exacerbate the violence between the Inkatha Freedom Party and ANC to derail the movements of the anti-apartheid forces.

“I am what I am … both as a result of people who respected me and helped me, and of those who did not respect me and treated me badly,” quotes Sampson of Mandela.

David James Smith, a journalist born in the south of London, wrote Young Mandela, focusing on his earlier years as the enemy of white minority rule of South Africa. Today many people picture Mandela as the benign elderly statesman he was when he walked out of prison in 1994, but this wasn’t always the case. This book tells of a time when Mandela was regarded as a threat to the well-being of the country, a revolutionary, a “terrorist” who threatened to overthrow the government prior to his imprisonment in the 1960s.

It captures the emotional tale of how Mandela had to leave his family to continue his work against the apartheid regime on the run, adopting many false names and disguises in attempts to evade capture. It lets the reader see Mandela in a different light, one that shows his flaws and reveals that he has made mistakes. Several sources believe this is one of the most important books on the man.

Another well-known biography is Nelson Mandela: An Authorised Portrait, which was written and compiled in 2006 by activists Mac Maharaj and Ahmad Kathrada, writer Mike Nicol, and historian Tim Couzens. It draws on extensive interviews with family members and other people of influence in Mandela’s life as well as some of the world’s leading political figures and entertainers. It is also illustrated with about 250 seldom seen pictures.

It is a tribute to the humanity and remarkable determination of the great man and chronicles his exceptional contributions to his people and the people of the world. It tells his story from his birth and childhood to his political involvement through his imprisonment to his term in the presidency during the mid- to late nineties. The foreword was written by the former president of the United States, Bill Clinton, and it features an introduction by former Anglican archbishop, Desmond Tutu. It is one of the most comprehensive tributes to Mandela’s life.

In 2006, Oxford University Press released a book called Mandela A Critical Life by Tom Lodge. It went on to be hailed as the most analytically incisive and discerning of the Mandela biographies to date. Drawing from a range of sources, including earlier biographies such as Fatima Meer’s Higher Than Hope and Anthony Sampson’s Mandela, this book gives the reader a number of new insights about the making of Madiba’s personality and his messianic leadership status.

In the preface, Lodge says: “My understanding of Mandela’s childhood is, I think, more complicated than in other narratives of his childhood.” This gives a sense that he touches on matters that other writers who have pursued the same objectives may have overlooked.

Two books focus solely on his life on Robben Island: A Prisoner in the Garden and Nelson Mandela’s Warders, with the latter examining the relationships he had with three of his prison warders. Mike Nicol, its writer, expressed the difficulty he had in understanding the relationships between Madiba and the warders, James Gregory, Christo Brand and Jack Swart. “Their claims address the central challenge of historiography: the authority of the storyteller.” He also goes on to say Gregory’s narrative stands in conflict with those of Brand and Swart.

Written by Sarah Groves, A Prisoner in the Garden is a visual documentation of Mandela’s years on Robben Island and includes some previously unpublished photographs, along with snippets from letters written to his family from his cell and extracts from his diary. Together these writings create a picture of life in prison but also give the reader an idea of just how determined Mandela was and how he and his comrades never gave up their dream of seeing their people living free of oppression.

There is plenty of food for thought here, though this is a small and by no means exhaustive selection of the many books written about and by Mandela.