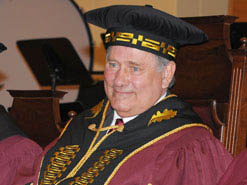 Former opposition leader Frederik van Zyl Slabbert died in Johannesburg on 14 May. The pioneering politician died peacefully at his home, surrounded by his family, according to his daughter Tania. She survives her father, together with her brother Riko and stepmother Jane.

Slabbert had been ill and had spent time in the Milpark Hospital in Johannesburg just prior to his death at the age of 70.

The ruling African National Congress paid tribute to the liberal-minded politician, describing him as “legendary” and saying it deeply mourned his passing.

“As leader of the Progressive Federal Party, not only did he make an indelible mark in shaping opposition politics against apartheid in South Africa, but he fought for constitutional democracy to be realised,” said party spokesperson Brian Sokutu.

“He will also be remembered as one of those white South Africans who facilitated contact with the African National Congress at the time it was banned inside the country,” said Sokutu.

Frederik van Zyl Slabbert was born in Pretoria in 1940 and grew up in the Limpopo town of Polokwane – formerly Pietersburg. In 1958 he matriculated from Pietersburg Afrikaans High School, and enrolled at the Witwatersrand University for a BA degree after a brief flirtation with theological studies, with the intention of becoming a minister in the Dutch Reformed Church.

An enthusiastic sports fan who had captained his school’s cricket and rugby teams, he transferred to Stellenbosch University at the end of his first year, mainly in order to play rugby. He obtained his BA in 1961, followed by an honours degree in 1962, a masters degree two years later, and a PhD in philosophy in 1967.

For 10 years Slabbert lectured in sociology at Stellenbosch, Cape Town, Rhodes and Witwatersrand Universities and took up a professorship in the latter’s sociology department in 1973. Despite his brilliant political career, he retained a love for academia and was appointed chancellor of his alma mater Stellenbosch University in 2008.

A heart attack at the end of that year prompted him to relinquish the post in order to spend more time with his family.

While still studying Slabbert became interested in the plight of the Western Cape’s coloured community, an interest which led him to campaign for a position of Stellenbosch University’s Student Representative Council. But even in those days his views were considered too liberal, and he lost his bid.

In 1974 he decided to make a full-time career of politics and joined the Progressive Party. In that year’s general election he stood as the party’s Parliamentary candidate for the Rondebosch constituency, snatching it from under the nose of the United Party. Slabbert managed to keep this seat for the next two general elections in 1977 and 1981.

Slabbert took over as party leader in 1979 and retired unexpectedly in 1986 after declaring that a tricameral Parliament, then being mooted, was useless in the South African situation of that time. In the following year he co-founded the Institute for a Democratic Alternative for South Africa, together with fellow Member of Parliament Alex Boraine.

This was the start of his secondary political career as a consultant, facilitator and analyst. In 1987 the institute organised the historic Dakar Conference, which saw Slabbert travelling with a group of white – mostly Afrikaans – South Africans to Dakar for 10 days of talks with the then-banned African National Congress.

From then on he held positions in various philanthropic organisations, such as the Open Society Foundation of Southern Africa, a funding body that promotes democracy and strong moral values, and also sat on the boards of a number of influential commercial companies, among them the Caxton CTP publishing group and Metro Cash ’n Carry.

In 1990 he co-founded the black empowerment and investment company Khula, which in 1994 became a 15% shareholder of the JSE-listed Adcorp Holdings, a group that Slabbert chaired from 1998.

Slabbert was also a published author who wrote or co-wrote several books including The Last White Parliament: The Struggle for South Africa, by the Leader of the White Opposition in 1986; Comrades in Business: Post-Liberation Politics in South Africa in 1998; and The Other Side of History: An Anecdotal Reflection on Political Transition in South Africa in 2006.

His political and academic work earned him worldwide acclaim, and a number of awards. He was a visiting scholar at the Massachusetts Institute of Technology in November 1982 and was elected as a Fellow of Oxford University’s All Souls College. He has received honorary doctorates from KwaZulu-Natal and Free State Universities, as well as the Simon Fraser University in Canada.