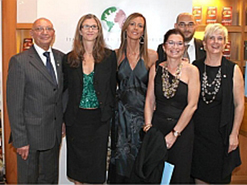 Not only did the Zimbabwe-born anchor and executive producer of e.tv’s hard-hitting investigative programme 3rd Degree add yet another award to her collection last month, but she seems to be revelling in a career decision of a year ago to free up some time so as to be able to concentrate more fully on her “two real passions”: journalism and her family. Happily married to her second husband, Patta is the mother of two young daughters.

And it would seem that, like many women her age, the 40-something Patta is discovering the liberation and confidence that the years can bring.

“The best thing about this age is no longer caring what other people think of you,” she is quoted as saying in a recent edition of a fashion chain’s club magazine. “I’ve learnt not to be so hung up on people who don’t like you.”

The fact that the apparently always self-assured and assertive Patta has ever lacked confidence might well come as a surprise to 3rd Degree viewers who have seen her courageously and tenaciously hold those in positions of power and responsibility to account.

Famous for her tough, no-nonsense approach she has had heads of state, politicians, business leaders and many others in the hot seat on the show in the decade that it has been in existence – but has also told the stories of the ordinary person in the street with compassion.

Patta’s unrelenting pursuit of not only answers but also excellence in a journalism career spanning two decades has garnered her respect and recognition stretching beyond the country’s borders. Already the winner of multiple accolades, including a 2010 South Africa’s Most Influential Women in Business and Government category award and the 2009 Vodacom Women in the Media award, Patta was honoured by the Italian Women in the World (IWW) association last month when she received a Tricolor Globe Award at a ceremony held in Bologna, Italy.

The IWW is a global networking association. Its awards recognise the achievements of men and women of Italian origins, or of Italians working abroad or in Italy for other countries, who have attained outstanding career success within “creative and innovative global industries” such as communication and events; art and design; performing arts; alternative energies and recyclable products; information and communication technologies; science, research, technology and engineering; and tourism.

Six achievers from Asia, Africa, South America and Europe were recognised in this year’s awards. Patta was honoured for her “achievements, excellence and contribution to society in the communications field in Africa”.

The main goal of the award, according to IWW founder and president Patrizia Angelini, “is to promote the important role of compatriots and other Italians who work abroad, through the spreading of personal success stories and highlighting the cultural and entrepreneurial effort.”

Angelini, a television journalist for Italian broadcasting corporation RAI International, founded the association in 2007 after her work brought her into contact with the larger Italian community around the world and she conceived the idea of creating a network to facilitate their international communication.

The awards project, which has the support of the Italian government, is active in promoting the “excellence, enterprise and beauty” of Italy and its culture and the Made in Italy brand internationally. This is done through on-line and television information and through events including seminars, international awards and intercultural exchanges.

“It is a great honour to be recognised by my country of origin,” said Patta, who owes her Italian heritage to her Calabrian father. “I am extremely proud of my Italian roots, so this is very exciting.”

Patta has previously said that while South Africa is where her heart is, Italy is indeed her second home. And like most good Italians, she loves cooking “fabulous Italian food” and relaxing with family, friends and a glass of fine wine.

Always mindful of the team effort required for the success of the current affairs show that draws close to 2-million viewers, she said: “It is also a great tribute to 3rd Degree and e.tv as they are regarded as making a significant contribution in Africa.”

E.tv’s channel head Monde Twala paid tribute to Patta, saying that “Debora is a committed journalist and executive producer who continually aims to better and uplift society by exposing the truth and keeping the public informed. 3rd Degree has been successful for the past 10 years and e.tv congratulates Debora for her ongoing investigative success.”

With a career of more than 20 years spanning radio, television and writing – she has co-authored two non-fiction books – Patta is one of the most prominent and respected journalists in South Africa, having reported fearlessly on virtually every major story in the country during that time. She became well known for her extensive coverage of Nelson Mandela from his release from prison to his election as South Africa’s first black head of state – the warm relationship they developed led to her being dubbed his favourite reporter.

During her time with e.tv since its inception in 1998 Patta has trained, developed and mentored many budding young television journalists and news anchors. She also led the team that launched South Africa’s first 24-hour news service.

Known for her no-holds-barred interviewing and for being unafraid to ask the tough questions, Patta maintains that she has never felt her achievements were limited because she is a woman. Indeed, in receiving the Vodacom Women in the Media award last year she had a strong message for young women: “Don’t just knock on the door, bash it down!”

But she does acknowledge the sometimes harsh truth that “women are so often seen as aggressive while men doing the same thing are regarded as tough, assertive, uncompromising”.

While Patta too has come under fire from those who feel her style of interviewing is too aggressive and not diplomatic enough, there is no doubt that she has brought many sinister cases to light, which might otherwise have continued to harm society.

She admits that finding the balance between career and family can be a tough challenge – and one she handles better at some times than at others. She finds release from the pressures of her “adrenaline-all-the-way” job through “strong coping mechanisms, trying to stay healthy and a supportive family”. A year ago she resigned from the demanding position as editor-in-chief of eNews to be able to concentrate more fully on 3rd Degree and her two real loves, journalism and her family.

“You can’t change the world, but you can make a difference to someone,” Patta has said. Over the years, the woman described as having “a unique front row in South Africa’s history” has done that many times over.