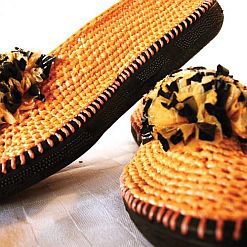 A pair of shoes created from waste by
Itlhabolole Waste Management, a self-
help project in North West province.
(Image:  North West Craft and Design Institute)

Somewhere in South Africa, in some little-known village, waste is being turned into beautiful income-generating objects.

A band of motivated women in Ikopeleng village, in the North West province, are leading a groundbreaking project, aptly called Itlhabolole Waste Management. They turn bin-destined waste into stylish clothing and other indoor designs.

“We collect dirty plastics to create beautiful artefacts,” says founding member Margaret Khambule. “The people we work with are very passionate about the project.”

Also in 2005, it was a recipient of a $2 640 (R20 000) donation from the Department of Trade and Industry (DTI)  through its Khula Enterprise, which facilitates access to funding for small and medium businesses. The Small Enterprise Development Agency also gave Itlhabolole $6 600 (R50 000) in that year.

“This is a project that shows that women are an economic power in rural areas and are determined to fight poverty…,” said then DTI deputy minister Elizabeth Thabethe at the South African Women Entrepreneurs Network imbizo in 2005.

The funds catapulted Itlhabolole to a prolific and stable organisation that is able to generate income for its members. Today the cooperative consists of 18 people, 14 of whom are women and two are youth.

“We sell our products and we also do exhibitions across the country. We try to boost our families,” said Khambule. “The project is not exactly big; we are just trying to sustain it.”

The DTI’s support for the group has been quite commendable, said Khambule. The National Development Agency (NDA), which is mandated by the government to fund community projects, has been funding Itlhabolole for the past two years. “The DTI and NDA are helping us a lot.”

Within just a year of its launch in 2000 the women were able to build their project’s headquarters in their village.

The cooperative continues to enjoy its success and growth. Its impressive showing at Decorex Joburg, an expo that took place in the city in August, secured Itlhabolele a deal to showcase its products to Germany in an exhibition in 2010, and a chance to get its products into German markets.

Itlhabolole received an overwhelming response at Decorex and its products were sold out within two days. The project took home a silver medal in the Best Product category.

“This recognition is not only for the work that this organisation is doing, it also confirms for the women of Itlhabolole Waste Management that life is what you make of it,” said Potlako Ntlatleng, NDA North West provincial manager.

“In a time when concern over the environment is gaining much attention, a small village in a corner of South Africa is creating wealth out of the waste that litters our streets,” Ntlatleng said.

More than just a business

Itlhabolole is more than just a business project; it is also an NGO. As part of its community work the group embarked on a cleaning campaign in Ikopeleng village on 2 October.

Khambule added that they were looking ahead to the 2010 Fifa World Cup, when millions of visitors are expected to flock to South Africa. “The country must be beautiful,” she said.

Farming could also become Itlhabolole’s next major success. The group has recently received a piece of land in their village and plan to use it to grow their gardening business.

At present they sell their vegetables in surrounding villages in the North West province. But the ultimate dream is to be able to supply major markets. “I dream about the farm becoming big, if we could just have a bigger market,” said Khambule.

She said they continue to receive support from other government ministries, such as the Departments of Agriculture as well as Arts and Culture. The latter department recently provided art and administration learnerships for Itlhabolole.