Brand South Africa’s research manager, Petrus de Kock, understands the perceptions investors from China, India and Brazil have of South Africa. But when it comes to opinions from neighbouring African countries, such information is not as concrete. 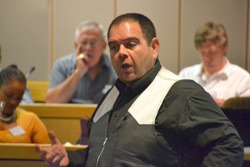 Brand South Africa research manager, Petrus de Kock, believes it is important to know what the rest of Africa thinks of us as it can impact on our economy and global competitiveness. (Image: Shamin Chibba)With this in mind, coupled with the idea that perception plays a major role in the country’s economy and its global competitiveness, De Kock is visiting three African countries to find out what they think of South Africa.

De Kock and a team of researchers landed in Kenya on Sunday 20 July, kick-starting the first leg of their tour of the continent. They will visit Nigeria at the end of August and Ghana in November. Brand South Africa is running the project in partnership with the Africa Institute of South Africa.

Researchers are looking to learn how the rest of the continent views South Africa. The research is based on the Anholt-GfK Nation Brand Hexagon, which includes criteria such as governance, immigration and investment, tourism, people, culture and exports.

In each country, focus groups will take place with leaders from business, media and academia to find out the extent of South Africa’s interactions with them. “We want the policymakers and thinkers to give their input,” De Kock said.

The researchers will also look at challenges other countries face when doing business with South Africans; the types of associations the countries have with South Africa and their recommendations on how to improve relations on multiple levels – with government, civil society, trade and security bodies.

For Brand South Africa’s 2014 International Investor Perception survey, 860 investors from 18 countries – which include the US, UK, Japan, Germany and France – were questioned about their perceptions of South Africa.

The survey also aimed to find out what drove investment decisions, identify barriers to investment, and determine which industry sectors investors associated with South Africa.

According to the survey, Nigeria and Kenya showed the lowest levels of familiarity with South Africa, a concern for De Kock.

When Brand South Africa hosted a research reference group in 2013 to discuss the kind of reputation the country had amongst its neighbours, it was agreed that a full analysis of South Africa’s interactions with fellow African nations needed to be drawn up. It was at this meeting De Kock noted the need for research into the countries unfamiliar with South Africa.

At Brand South Africa’s International Perceptions seminar held in April this year, De Kock said managing a country’s reputation was essential to increasing its global economic competitiveness and attracting foreign investment. Reputation, he added, was shaped by the political, civil society and business relationships it has with other countries.

Opportunities and challenges to South Africa’s reputation would be identified based on the findings from the various African engagements.

The trips would also give indication of just how much South Africa has achieved in its 20 years of democracy, he added. “We are a relatively young country on the continent. This trip will help us understand what we have achieved in business and government in that time.”