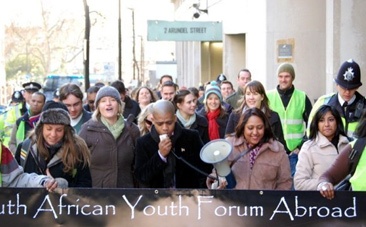 At 4am, London is dark and raining. While my taxi snakes me through the deserted streets, a trainee Jesuit priest is camped outside South Africa House.

In the radio studio the BBC journalist asks why we vote, why it’s important, and that hackneyed scribbler question: how does it make you feel?

Why did Matthew Charlesworth, our priest in the darkness and first London voter, queue in that deserted square? Obligation, duty, a desire to count and be counted as a South African. All the reasons that emerge from everyone I speak to, and my motivation too.

Eventually every South African overseas is treated like a traitor. Someone who cut and ran and now talks the country down from the discomfort of a damp and foreign shore.

Yet here we are in our thousands filling in forms, fishing out unused ID documents and lining up around the block to contribute our one, small, indelible cross.

At the back of the queue is Heinrich Volmink, who travelled down from Glasgow in Scotland because it is a great honour and a patriotic duty to be here. So much passion and purpose swirls through this five-deep line. We stand only 25 metres from where Mandela gave his last speech to London – perhaps ever.

He spent nine hours on the “freedom bus”, continues Heinrich, because my ancestors could not vote.

Not everyone is as happy. Like a creature of caricature, a man stands with an old South Africa flag shirt. I suppose he too exercises a choice. We watch him like we would an exhibit. One foot in the old world and a vote in the new, I think. I doubt he will find peace, anywhere. Shame.

After three radio interviews and breakfast, it’s time to vote. The early morning bankers, accountants and the priest have retreated to their terminals. Now the backpackers, students and out-of-work consultants shuffle forward in unison. You mustn’t lower your standard, says one man to a girl 20 years his junior as he inquires about her job. He doesn’t have one: tough times.

London is South Africa’s largest polling station. Over seven and a half thousand citizens – almost twice as large as the next biggest venue. But our queue is orderly. The mood is good-natured, but also reflective.

Examining my compatriots, it’s clear that for most of us, democratic elections are all we have ever known. As you would expect, it’s a mostly white queue with the occasional darker face. Around them cluster journalists: the British ones asking who they are voting for. My vote is my secret, we all say.

Throughout, I “tweet” from my phone. These micro-blogging sms’s capture the moment when a man claiming to be a Freedom Front Plus candidate marches up to the door demanding to see the electoral officer.

I leave them in a huddle and fill in my forms. First an envelope with your name and voter district number. Then downstairs to check documents, receive a ballot and cast my vote. I get three calls in the voting booth.

Your smile has stamina, I say to the official, and we all chuckle. It will be a long day, but so far it is going smoothly: if all your documents are in order.

So why did I vote? To reaffirm my citizenship; to exercise my rights; to respect my heroes and dignify their sacrifices and yes, to make a difference.

Though Rudi Talmakkies from Saldanha said it best: Obama gave people a totally new view. The youth realise they are part of the solution.

For me, that works.

Timothy Schultz is deputy head of communications and marketing at The Learning Trust, a not-for-profit company that runs all the education services for the London borough of Hackney. A South African who has lived in London for about eight years, Schultz is an active member of the Global South Africans network.