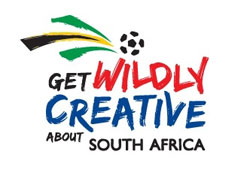 South Africa has marked the start of the 100 days countdown to the 2010 Fifa World Cup on 2 March with a variety of patriotic celebrations and flag- flying spectacles. The football spectacular kicks off on 11 June.

The Get Wildly Creative About South Africa online advertising contest aims to inspire South Africans to get together as a nation, use their creativity, collaborate with the international community, and come up with ways to promote the country as a vibrant destination ahead of the World Cup.

The eight-week, people-inspired, online ad contest, which starts on 15 March, is part of a major nation branding research project undertaken by the Chief Marketing Officer (CMO) Council and the International Marketing Council (IMC) of South Africa.

The IMC is responsible for defining and shaping Brand South Africa’s image throughout the world.

With social media networks hosting billions of monthly visitors, conversations and connections, the CMO Council’s new GeoBranding Centre is looking to evaluate the level of voice, influence and creative pull in these interactive online communities, particularly as it relates to shaping perceptions of countries, destinations, locations and origin of products.

The Get Wildly Creative About South Africa ad contest will be hosted on the Zooppa.com people-inspired advertising platform and will use viral communications, online conversations, blogging and cyber chatter to talk up interest and participation in this inventive country branding program targeted at the world’s 1.7-billion Internet users.

Current and aspiring creative professionals, digital media buffs, South African citizens and expatriates, and anyone with a lust for travel to Africa, are invited to come up with inventive ways to produce a fresh and evocative message about a country that has gone from tragedy to triumph in less than two decades.

Contest entry information and a creative brief, giving background on the assignment and links to South African resources, are available at the Zooppa.com contest centre.

Cash and prizes – donated by SA Tourism, in-country partners and creative technology solution providers – will be awarded to the top submissions within each category. These are Best Print Campaign, Best Online Banner Campaign, and Best Video Segment or Commercial.

Winning entrants will have their work showcased globally to the CMO Council’s 5 000 members who control more than US$150 billion (R1.2-billion) in annual marketing spend and recognised at a special IMC-hosted reception in New York City, the world’s media centre and creative hub. They will also win trip packages courtesy of SA Tourism and other travel, hospitality, lodging and merchandise partners in South Africa.

“With the world’s eyes upon it as host of the 2010 Fifa World Cup, South Africa is seeking to establish itself as a competitive and relevant nation brand,” added Paul Bannister, CEO of the IMC. “We’re excited about the potential for social media channels to generate greater discourse and narrative about our brand from people who have experienced or researched our special place in the world.”

Separately, the CMO Council’s GeoBranding Centre will conduct monthly analytics on the tonality, sentiment and prevalence of conversations, commentary and news about Brand South Africa leading up to the four-week World Cup.

“We’re thrilled to partner with the CMO Council on this very exciting initiative and provide the team with powerful and meaningful analytics to support the success of the new GeoBranding Centre, said Susan McPherson, vice president, business development at PR Newswire.

With billions invested in the African sports spectacular, the CMO Council’s GeoBranding Centre will be looking at the host country’s effectiveness in shaping perceptions and using the global football spectacle to optimise its reputation and appeal worldwide.