The smart ID card and the new passport were introduced by Home Affairs in 2013 as part of Home Affairs’ modernisation programme.

More than one million smart ID cards have been issued to South Africans in less than a year and the Department of Home Affairs says it is confident that it will reach its target of 1.6-million by the end of the 2014/15 financial year.

Mkuseli Apleni, the department’s director general, said at a media briefing on Wednesday that the department was making “good progress” in replacing its outdated systems with new and secure technologies.

Of the 403 Home Affairs offices, 110 are equipped with the necessary system for processing smart ID cards and new passports, Apleni said. The department plans to increase this to 140 offices by March.

“Our task is to ensure progressively that the over 38-million citizens with green ID books convert to the smart ID cards by the time this process concludes.” Smart ID cards are being issued free of charge to 16 year olds as well as to citizens older than 60.

The smart ID card and the new passport were introduced by Home Affairs in 2013 as part of Home Affairs’ modernisation programme. The new ID card and passport have strong security features, which significantly reduce the chances of fraud.

The new system has also improved delivery time for IDs, the department said. While it used to take 54 days for an applicant to get an ID book, it now takes less than 10 days.

“The new cards are printed immediately at the Government Printing Works. That is why we are able to send you text messages promptly, informing you your cards are ready for collection. Do collect them,” said Apleni.

Apleni said the smart ID cards could only be issued at offices which have the Live Capture system.

Citizens are opting to apply for the new smart ID card rather than the green ID book, resulting in long queues at some offices, he said.

The Live Capture system moves away from paper forms and manual fingerprinting. But because it is online, “even the size of the bandwidth poses another challenge”, he said. Alpeni said the offices are able to operate even when they are offline.

“In the design of the system, we have the offline mode so that our offices should still be operational even when power is down, although as a temporary measure. Load shedding may impact on client service, but we have made provision for such eventualities,” he said.

Apleni said the modernisation programme would transform the manner in which Home Affairs rendered public services in all their offices, including at South Africa’s ports of entry.

He said there was also an automated application process in place for the Dispensation for Zimbabwean Permits, “through which they are normalising the stay of Zimbabwean nationals who were in the country illegally”.

According to the department, Home Affairs Minister Malusi Gigaba will soon announce measures to address the current network challenges.

Home Affairs is in discussions, through the Department of Telecommunications and Postal Services, with the South African State Information Technology Agency (SITA) and Telkom to upgrade office bandwidth and put measures in place to prevent cable theft in metropolitan areas. 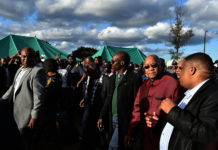