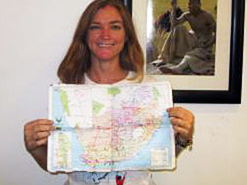 Sonja Kruse hiked across South Africa to find the spirit of ubuntu in her compatriots.
(Image: Ray Maota)

To find out exactly what it is that unites South Africans, Sonja Kruse decided to hitchhike across the country for a year – starting out with only R100 (U$14.42) in her back pocket.

The 35-year-old Kruse, originally from Eshowe in KwaZulu-Natal, began her 350-day life-changing journey with one thing in mind: to unlock the meaning of ubuntu – a humanist philosophy of fellowship and community, which is an integral part of South African society and one the country is known across the world for.

“Ubuntu – in its isiZulu essence – means you are who you are through the people you encounter,” Kruse said.

“As people, we have a connection and if you tap into that connection, you will realise that nothing in society is random as we all are intertwined.”

Kruse said the hitchhiking idea came to her five years ago: “I had a dream in 2005 where I saw the open road, a backpack, R100 and, in the end, books flying off the shelves. It persisted in my mind, so last year I decided to do something about it.”

Before she set off from East London on 31 October 2009, Kruse resigned from her job as manager of a game farm and sold her car.

Her backpack was crammed with 28 items of clothing, two notepads, headgear and a poncho for the rain, a first aid kit, toiletries, a camera and R100.

Kruse said: “I decided to adopt an open mind and heart in order for me to thoroughly explore the concept of ubuntu. My first stop was Chilumna in the Eastern Cape, where I arrived in a taxi.”

In total, she travelled through 114 towns and stayed with 150 different families from 16 different cultures.

“In that process I took 13 000 photos, far more than what I had taken in my lifetime.” Apart from taxis, Kruse also got lifts from tractors, trucks and cars.

Different, but the same

Kruse lived in shacks, tiny houses, mega mansions and middle-class homes during her trip. She saw the good and the bad side of reality in South Africa, but one thing that remained the same was the lengths her hosts would go to, to make their guest feel at home.

“I would just walk up to people and tell them who I was and what I was doing – and they gladly welcomed me into their homes. The families I left behind would even suggest where I should go next if I need a place to stay.

“I was in the Western Cape and this millionaire had offered me a penthouse overlooking the beach to sleep in. It had all the amenities to make a person stray from their desired intentions, but he was gobsmacked when the next morning I woke up and told him I’m moving on to a government-housing settlement nearby,” she said.

Kruse explained that the trip was not about herself, but about the people of South Africa and how – despite their financial, social, religious and political differences – they could all be hospitable in different ways within their socio-economic standing.

“I could have a shower in a decent home the one day and have a bath in a makeshift basin the next, but I would never leave a home without eating or even being given money – which I never asked for,” she said.

The most memorable part of the trip was arriving at a township in Ventersdorp less than a month after Eugene Terreblanche was murdered there. “I was welcomed with open arms in a township that was described as volatile, and treated like part of the family.”

Although Kruse felt safe throughout her trip, there was a point after six months on the road when she wanted leave everything and go back home.

“Six months down the line I was physically, mentally and spiritually exhausted, but then I got a lift from this guy. We had clashing political points of view, but the mere fact that we displayed tolerance to one another, made me see I had to go on with my exploration of ubuntu, as tolerance was part of it. We as South Africans are a model country, whose tolerance is shown with our 11 official languages,” said Kruse.

Kruse spoke of how, in South Africa, a meeting with someone doesn’t just end there – there is continuation. “I would be in Gauteng and people I met in the Western Cape would ask me whether I had a raincoat.”

Another example is a text message Kruse received from Phumza, who she met in Scenery Park, a township in East London, six months previously.

“Good morning Sonja, it is good to hear that the ubuntu girl is doing fine. I can see from the map that you have travelled a lot, have a nice day,” wrote Phumza.

Kruse had decided to text message everyone she had met every two weeks to tell them where she was and how she was doing, because most of them would call her and ask how she was and say how worried they were.

Ubuntu is no myth

“Old Mutual invited me to come and give a motivational talk at one of their events in Sandton while I was in Gauteng. The money I got from them was used to book myself into bed and breakfast establishments when I got to a town late and could not find anyone to house me.”

Kruse also used the money to buy food for the homes in which she stayed. In one instance she stayed in a shack and her hosts couldn’t afford to take their baby to the clinic, so she gave them money for that.

“I now have 150 families in 114 towns and they’re from 16 different cultures. One thing I have found is that ubuntu is not a myth – it definitely does exist.”

With no tertiary education, Kruse now wants to write a book about her trip through the country, and do what she can to preserve the spirit of ubuntu, which is uniquely South African.