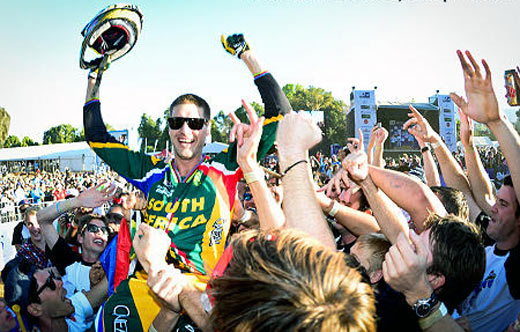 It has been almost a week and I still get a buzz out of it. Just thinking back or watching YouTube videos brings a smile to my face. You see, I was there on Sunday, 1 September, when South Africa’s Greg Minnaar blasted his way to victory in the downhill at the 2013 UCI MTB & Trials World Championships in Pietermaritzburg.

That victory made him a three-time world champion. He’s also a three-time runner-up in the World Championships. In addition, Minnaar has won the overall World Cup title three times and finished as runner-up four times. He has more World Cup podium finishes than anyone in history.

All of those achievements put him in the conversation as one of South Africa’s greatest sportsmen ever.

You can pick your favourite from whatever sport, but with a record like his, Minnaar has to be in the conversation.

Two years ago, Greg Minnaar was a great of downhill racing. By winning two World Championships and finishing runner-up in the World Cup twice since, he has become a legend of the sport.

France’s Nicolas Vouilloz is the only other man in the conversation when it comes to the greatest downhill racer of all time – although Australia’s Sam Hill is a narrow third. Vouilloz won the World Championships a record seven times and topped the World Cup standings five times. At first glance, this trumps Minnaar’s achievements, but Vouilloz was dominant mostly in the sport’s early days, when the competition was not as tough as it is today.

It’s the old story of it being difficult comparing athletes from different eras. Take the example of Sir Donald Bradman, by common consensus the greatest cricketer of all time. His batting average of 99.94 is way ahead of the number two man on the list, Graeme Pollock, who averaged 60.97. Yet only a fool would believe Bradman could achieve such dominance in this day and age.

It was Minnaar who brought to an end Vouilloz’s run of five World Championship downhill titles in six years back in 2003. It took him another nine years before he won a second rainbow-striped jersey, but in that time he narrowly missed out three times, when he finished second, and won three World Cup overall titles.

To my mind, the way Minnaar wins reminds me of Roger Federer. The man from Pietermaritzburg is tall at 1.90m (6 foot 3), but he has a grace and technical brilliance, even in the pursuit of speed, that stands out and confirms his status as special.