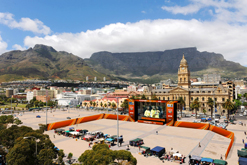 An artist’s impression of Cape Town’s
Grand Parade, where one of South Africa’s
fan fests will be hosted during the 2010
Fifa World Cup. (Image: Fifa)

With just months to go until South Africa hosts the world’s biggest football tournament, Fifa has launched a series of action-packed fan events that will connect lovers of the Beautiful Game everywhere.

The Fifa Fan Fest – to be staged in the nine South African host cities as well as Berlin, London, Mexico City, Paris, Rio de Janeiro, Rome and Sydney – will enable football enthusiasts to watch free, live screenings of all 64 matches in a secure and festive environment.

Official public viewing events were first launched by Fifa in 2006 during the World Cup in Germany. In June and July of that year more than 18-million fans gathered at 12 designated fan parks around Germany, electrifying the nation on a scale never seen before during such a tournament.

Building on this, Fifa has decided to extend its fan parks to include the host country as well as a series of iconic locations across the world, spanning all three key time zones for a truly global experience.

A first for football fans

“The Fifa Fan Fest was an important part of the success of the 2006 World Cup and we believe that the 2010 fan fests, both in South Africa and in the other seven international venues, will bring an unprecedented experience to millions of football fans in South Africa and around the world,” said Fifa President Sepp Blatter.

“The first International Fifa Fan Fest is another milestone in bringing the excitement of the World Cup to an even greater audience.”

In South Africa the fan fests will be organised by the host cities, Fifa and the Local Organising Committee (LOC). Fifa and the respective cities will take responsibility for the international events. At each site there will be a top-quality giant screen, performance stage and sound and lighting equipment.

And they won’t just be about football: in addition to the match broadcast, each event will offer all-day entertainment with a distinct local flavour, thereby exporting the thrill of the first African World Cup to destinations worldwide.

“We are communicating with ambassadors in each city to ensure a South African atmosphere, complete with food, dancing and music,” said Fifa marketing director Thierry Weil.

In South Africa this will offer lucrative opportunities for small businesses and informal traders, who will be encouraged to sell traditional cuisine and arts and crafts at the events. Local musicians, dancers and artists will also be given the chance to perform. But host city authorities will require these people to consult with them first before setting up at a venue.

During the German World Cup 80% of non-football stories came from the fan fest sites, and Fifa is working hard to ensure the same happens during 2010.

All media organisations will therefore be free to broadcast and report from all public viewing events. South African and international fan fest cities may choose to have an on-site media accreditation system, but this will be a simple process and unrestrictive. More information on this and the facilities for journalists at the venues will be made available in 2010.

In South Africa all fan fests will be fenced off and incorporated into the wider host city security plans. Both private security and police will be deployed inside and outside the venues, and full disaster management and medical facilities will be available. There will also be special access for disabled fans.

“Transport arrangements will differ from venue to venue, but there will be a park-and-ride system and public transport options, so South Africans won’t have to bring their own cars,” said LOC CEO Danny Jordaan.

Fifa considered a number of factors when selecting the overseas fan fest cities. They were analysed according to their popularity as tourist destinations, experience in hosting major international sporting events and demographic make-up.

Fifa felt it important to choose cities that have a diverse population that supports a variety of teams, ensuring lively crowds even if the home country gets knocked out.

The South African venues were chosen for their crowd capacity and proximity to the official 2010 stadiums. Cape Town’s fan fest will be at the Grand Parade in the city’s CBD; St Georges Park, which is 5km from the stadium, will be Port Elizabeth’s venue; and scenic New Beach will be the site in Durban.

Bloemfontein’s fan fest will be at Mangaung Outdoor Sports Centre, which has a capacity for 20 000 people. Bergvlam High School will be Nelspruit’s facility as it’s only 5km from the stadium; Polokwane Cricket Club will be the venue in Polokwane; Rustenburg’s fan fest will be at Fields College School; while host city Pretoria/Tshwane’s venue is still to be confirmed.

Johannesburg, which will host the World Cup’s opening and final matches at Soccer City, will have two sites: one at Elkah Stadium in Soweto – South Africa’s largest township home to 1-million people; and one at InnesFree Park in the commercial hub of Sandton.