South Africa’s main Freedom Day event will take place on Sunday at the Union Buildings in Pretoria, where President Jacob Zuma will make a special address and a multi-cultural carnival, mirroring the diversity and solidarity of the country, will be staged.

South Africa’s Freedom Day commemorates the country’s first post-apartheid elections, held on 27 April 1994, when South Africans of all races got to vote for the first time.

This year, however, the celebrations will assume greater significance, as the country reflects on the journey of the last two decades, and how far it has come since the end of apartheid and the birth of democracy.

Sunday’s events will begin with interfaith prayers at Freedom Park outside Pretoria, followed by a cultural street parade starting in Sunnyside, Pretoria at around 7am and leading into the south lawns of the Union Buildings at around 9.30am.

This will be followed by the formal programme, which will include a South African Air Force salute flight and air display, a performance by Kutlwano Masote and the Born Free Orchestra, Zuma’s address, a South African Airways fly-past, and a Freedom Dance.

The morning’s events will be followed by a programme of music and dance, free to the public and involving various South African artists, that will run from around 12.30pm through to 4pm.

In a separate ceremony at the Sefako Makgatho Presidential Guest House in Pretoria, starting at 1pm, Zuma will confer National Orders, the country’s highest civilian honour, on citizens and members of the international community who have contributed meaningfully towards making the country a free, democratic and successful nation. 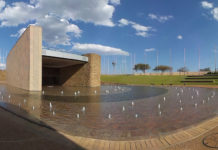