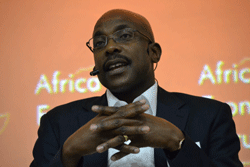 Brand South Africa’s chief executive, Miller Matola, believes South Africa has unique strengths that can boost its global competitiveness. (Picture: Shamin Chibba)GIVEN the rapid changes in technology and the global economy, South Africa must work to improve its competitiveness if it is to keep up with the rest of the world, especially with fellow developing countries – which is the reason behind the South African Competitiveness Forum (SACF).

Brand South Africa will launch the forum on 25 July at the Hyatt Regency Hotel in Johannesburg, during a pan-Africanism and African integration panel discussion.

The launch will act as an introduction to the inaugural SACF, to take place on 5 November 2013.

The company intends to use the SACF as a platform to identify competitive strengths and weaknesses in the South African economy, explains Brand South Africa’s research manager, Petrus de Kock. With the help of the government, business and civil society, it will comprehensively examine domestic and international factors that could affect the country’s competitiveness.

South Africans will be encouraged to become active participants in the economy to achieve the goals of the National Development Plan (NDP), which include poverty alleviation, job creation and quality health care. “One of the main goals of the SACF is to solicit the right input [from experts].We just need to go to the NDP to see what needs to be improved.”

Brand South Africa expects three outcomes from the SACF, which should go a long way in enhancing the country’s competitiveness. These are:

The forum will be split into five breakaway working sessions to cover topics such as education and skills, products and services, governance and leadership, infrastructure, and foreign direct investment competitiveness.

A leader among developing countries

According to the 2012/2013 Competitiveness Report from the World Economic Forum (WEF), the country fares well when compared to other emerging economies, especially those of the Next11 group. It is the global leader in legal rights, regulation of securities exchanges, and efficiency of corporate boards, and it has strong auditing and reporting standards. It is second when it comes to availability of financial services and third in financing through the local equity market.

Miller Matola, Brand South Africa’s chief executive, says the country, when compared to other Brics nations, comes first in five of the 10 criteria the World Bank uses to assess ease of doing business. These include starting a business, dealing with construction permits, getting credit, protecting investors, and paying taxes.

These positive aspects, he adds, mean South Africa offers protection to foreign direct investments and has a suitable environment for new trade, investment and related economic interactions. “These indicators highlight that South Africa has unique competitive strengths in the context of the developing world.”

De Kock points out that competitiveness is affected by internal and external factors. “The former can be rectified but the latter is not as easy. For instance, the rand value can go down and suddenly a South African product is not competitive anymore. So we have to find areas where it is possible for us to intervene.”

To boost its competitiveness, de Kock suggests that more partnerships between private and public sectors need to be established to support education and skills development. “We are looking at a practical solution and not trying to reinvent the wheel. These partnerships need to have foolproof strategies to run efficiently.”

In terms of its reputation, which is a key indicator in a country’s competitiveness, South Africa remains stable. According to the 2012 Anholt-GfK Roper Nation Brand Index, which measures a nation’s reputation, South Africa retained its 36th spot – out of 50 – for a second consecutive year. This is a great feat, considering two-thirds of countries on the list experienced a decline.

Though culture is South Africa’s strongest asset, it slid to 28th on the index. The country continues to rank 34th for tourism and 16th for sporting excellence.

Brand South Africa’s annual international investor perception study, titled Project Thrive, indicates that there has been a steady improvement in investors’ views of the country as a business destination, despite the recent labour issues in the mining industry. It also shows that the country’s economic environment is seen to be full of opportunity.

This is evident in the slight upturn in investment in South Africa in 2012, which is yet another achievement when considering Brics partners Brazil and India experienced a dip in the same period. The Project Thrive study notes that South Africa could attract more foreign direct investment if it could offer suitably qualified labour to investors.

On 30 August, De Kock will host a research reference with the purpose of gathering stakeholder and expert input into the breakaway working sessions to take place at the Competitiveness Forum on 5 November 2013.