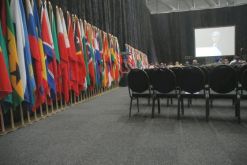 Top global leaders and businesspeople, including those on the Time 100 and Fortune 500 lists, will head for Cape Town in June for the New Global Opportunity Conference, hosted by the powerful Time Warner group.

From 28 to 28 June, while the sporting world takes in the spectacle of the 2010 Fifa World Cup in South Africa, some of the most influential people on earth will gather at the Cape Town International Convention Centre for the first-ever Time/Fortune/CNN Global Forum.

The conference is a sign that the city is growing in stature as a holiday and conference destination.

City of Cape Town business tourism manager Amanda Kotze-Nhlapo said it has made 48 bids for meetings and conferences during 2010. “Cape Town as a business destination is on par with the likes of Europe. We are a major industry contender.”

The Fortune 500 and Time 100 luminaries will mingle with distinguished South Africans and visitors from government, business, the arts and sciences, and civil society.

The special guest speaker has yet to be announced, but past speakers include Microsoft CEO Steven Ballmer, former French president Jacques Chirac, President Hu Jintao of the People’s Republic of China, former US president Bill Clinton, and media mogul Rupert Murdoch.

The Time Warner entertainment and communications group will co-host the three-day event with South Africa’s Department of Trade and Industry. Editors of Fortune, Time and CNN will lead the sessions together with relevant experts.

Fortune magazine has hosted the Global Forum since its launch in 1995, but 2010 will see the other two partners come on board for the first time. The event will receive broad coverage in a variety of media genres.

The purpose of the gathering is to exchange new ideas, identify opportunities, and stimulate debate on issues that affect the global economy, and especially that of the developing world.

This year Africa will be the main item on the agenda, as established companies look to emerging markets as a source of new approaches and business models. According to Time’s international editor Michael Elliot, the “old ways” won’t suffice if growth is to be inclusive and sustainable.

“And the role and potential of those who have been marginalised in the past – the poor, especially women and girls – will only grow,” he added.

Topics will range from sport as a driver of economic growth and the role of social media in the developing world, to a discussion of China’s operations in Africa, business strategies for emerging markets, and control of major diseases.

Time managing editor Richard Stengel sees Cape Town as a fitting setting for the high-powered meeting, as it is a model for the new Africa: “diverse, entrepreneurial, forward-looking,” wrote Stengel in the latest edition of the magazine.

Stengel was in South Africa recently to attend the handover of documents relating to former president Nelson Mandela’s autobiography Long Walk to Freedom to the Nelson Mandela Foundation, and historical Rivonia Treason Trial documents to the National Archives.

The Time editor is closely connected to South Africa, having collaborated extensively with Mandela over a period of nearly three years to write Long Walk to Freedom, which was published in 1995. Stengel is married to a South African and Mandela is the godfather of his eldest son.

“We’re calling this conference the New Global Opportunity,” wrote Stengel. “This is the idea that global economic power is shifting to the developing world – to Africa and the Middle East, as well as to Asia.” He added that these young markets are not just frontiers of growth, but are the sources of new ideas and models that can be applied everywhere.

Stengel also mentioned that the much-anticipated World Cup would receive special coverage from Time in an upcoming issue on global football.

The annual Time 100 list names what the magazine considers to be the 100 most influential people of the year. Since the list’s inception in 1998 a number of South Africans have made it to the rankings. Former president Nelson Mandela is the only one to have appeared more than once – he was listed in 2004 and 2005, and appeared on the list of the 20th century’s most influential people.

The Fortune 500 list, now in its 56th year, ranks the top 500 US public and private companies according to their gross revenue. No less than 17 South African companies are listed on the Fortune Global 2 000 list of the world’s top 2 000 public companies, based on sales, profit, assets and market value. Among them are the Standard Bank group (223), Sasol (305), the Bidvest group (1102), and Shoprite Holdings (1749).