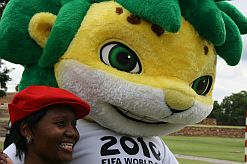 The South African government has thrown its full weight behind Football Fridays – a campaign to drum up support for national football squad Bafana Bafana ahead of the 2010 Fifa World Cup.

Football Fridays was officially launched at the Union Buildings in Pretoria on 30 October 2009 and Deputy President Kgalema Motlanthe was there to give his seal of approval.

“We would like to make the call to all South Africans, especially public servants, to wear football jerseys every Friday in anticipation of this great celebration coming our way next year … the Football Friday concept is one such initiative that government fully supports,” he said.

The drive was introduced in September by the International Marketing Council (IMC) and has since been encouraging the public to don shirts of their favourite team, be it Kaizer Chiefs or Manchester United, at the end of every working week.

As the custodian of Brand South Africa, the IMC’s primary task is to promote the country as a destination “Alive with Possibility”.

“Fly the Flag for Football”, of which Football Fridays is a part, and “Feel the Diski Rhythm: it’s time to celebrate 2010!” are further IMC initiatives designed to ignite football spirit in South Africa before the World Cup kicks off here in June next year.

At Friday’s launch government officials and Union Buildings employees turned out in their droves to be introduced to Football Fridays in style. “We must ensure that every public servant wears their jersey every Friday,” said the Presidency’s chief operations officer Jesse Duarte.

The intention is to get every working South African in his or her football jersey every Friday, including those in the private sector, where the initiative is already taking shape, said Irvin Khoza, chairperson of the 2010 Local Organising Committee.

Besides getting the nation in the desired mood for an exciting tournament, Football Fridays will also inspire national unity that is “required to host a successful World Cup”.

“Football Fridays is a brilliant concept. We encourage everybody to support it,” Irvin said.

Football Fridays, said Sports and Recreation Minister Makhenkesi Stofile, is all about “laying a solid foundation to build a movement around Bafana Bafana”.

The minister added that the initiative will go a long way in reigniting the spirit shown to the national team during the Fifa Confederations Cup in June 2009.

Bafana, which had struggled during the eight matches in the run-up to the tournament, put in a sterling performance at the Confed Cup. It collected four points in the group stages and went on to lose 1-0 to Brazil in the semi-finals. Many a local football critic commended the team for their accomplishment.

The Brazilian coach, who is famed for bringing brought World Cup victory to his country, is replacing fellow Brazilian Joel Santana who had a difficult time during his South African tenure.

At the launch world football icon and former Bafana captain Lucas Radebe said South Africa’s recent below-par performance is not likely to continue into 2010. “I believe that this is a blessing in disguise … the team will really perform well at the right time. The players must know that they have the support of the nation.”

But Bafana Bafana isn’t the only team South Africans are expected to support during next year’s spectacle: all African teams participating need the backing of the nation.

To date Ghana and Ivory Coast have secured their places, alongside South Africa, which qualified automatically as the host nation. The last African nation to be represented at the World Cup has yet to qualify.

Motlanthe was quick to congratulate the placing of the two West African teams, which look set to deliver a promising performance.

“Bafana will not lack support, but we must ensure that the other African teams are largely backed … we call on all South Africans and Africans to come together as a one team,” Khoza said.

“[It is] an event that will send a message to the world that Africa’s time has come,” he added.

Football Fridays also aims to inspire South Africans to give a warm welcome to international football fans and become top-notch hosts during the World Cup.

“We must also ensure that those who come to our shores want to come back again. We must make them love South Africa,” said Stofile.

To ensure a smooth and safe World Cup, government has invested R1.3-billion (US$164.9-million) to boost security in the country. As part of this, 41 000 police officers, including 10 000 reservists, will be deployed to monitor the month-long event. The officers will be supported by 10 000 staffers from various government departments to form the Joint Operational and Intelligence Structure.

During next year’s World Cup dedicated investigation teams and special courts will be set up to deal with all football-related crimes on a 24-hour, seven-days-a-week basis, Motlanthe pointed out.

The special courts and police stations will be set up close to host venues, “making processing and prosecutions much quicker, especially if or when a foreigner is affected”.

“We have every confidence in our security establishment to secure this event,” he said.

World Cup visitors will also be treated to a much-improved public transport system, made possible by government’s R11.7-billion ($1.48-billion) investment.

The world-class Rea Vaya bus rapid transit system, already operational in Johannesburg, will be extended to the host cities of Cape Town, Pretoria/Tshwane and Port Elizabeth, while other modes of public transport are also being beefed up around the country.

“I have no doubt that when the last whistle blows, our country and continent will never be the same again,” Motlanthe said.

With South Africa being a country of rhythm, there has to be a dance style to rouse excitement ahead of the 2010 spectacle – and the Diski Dance is there just for that. It will be the official theme dance for the nation during the tournament.

All South Africans are encouraged to learn the dance, created by choreographer Wendy Ramokgadi.

“I urge all of you to learn the Diski Dance as part of being a good host and welcoming the world in a celebratory style,” said Motlanthe.

Groups of young dancers have been deployed across the country to teach the public the moves, said senior dancer Cassius Tlhotlhalamaja. “People are interested in Diski Dance. It is becoming a trademark,” he added.

The dance, which imitates “diski” moves, is easy to learn, with the full version just five steps long. The entire piece can be performed in less than three minutes, experts say. “Diski” is a South African township slang word for football.

The dance is also being promoted through commercial media, with a Diski Dance advertisement having already hit local television stations.

“It’s our South African Macarena and our R Kelly step in the name of love,” Tlhotlhalamaja said.