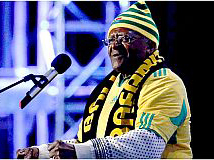 Archbishop Emeritus Desmond Tutu has been honoured with the Fifa Presidential Award for his role in uniting the nation ahead of the 2010 World Cup and embodying the spirit of the Beautiful Game.

He was presented with the accolade on 10 January 2011 in Zurich, Switzerland, by Fifa president Sepp Blatter during the Fifa Ballon d’Or 2010 soccer awards ceremony.

The 79-year-old Nobel Peace Prize laureate said: “I’m staggered … when I was told, I felt deeply humbled and also deeply honoured. To be recognised in this way is very significant and I accept this on behalf of the South African people, who really deserve the applause for having hosted such a fantastic World Cup.

“It was a fantastic thing; no one could have predicted that South Africans would feel so good about themselves. It was reminiscent of the time, when Nelson Mandela was released from prison or when we first won the Rugby World Cup,” added Tutu.

Thabo Makgoba, the current Anglican Archbishop of Cape Town, congratulated Tutu by saying: “We are so proud of him. Once again he has shown how, in any and every context, he is able to continue to play a reconciling role in his public ministry, in this country, on this continent, and throughout the world.”

Tutu also played an integral role in bringing the 2010 World Cup to South Africa by joining a delegation that went to the Caribbean in 2005 to convince that region’s football federation boss, Jack Warner, to vote for South Africa in the 2010 bid. Tutu was joined on this trip by fellow Nobel laureates Nelson Mandela and FW De Klerk, who preceded Mandela as president of South Africa.

The Fifa Ballon d’Or award honours male and female players of club and national teams who have excelled throughout the football season. The winners are chosen through a vote by coaches, captains of national teams and high-profile sports journalists.

The accolade is a result of a 2010 merger between the Ballon d’Or award, initiated by France Football magazine, and the Fifa World Player of the Year award.

Messi faced fierce competition from his Barcelona teammates, Andreas Iniesta and Xavi Hernandez. Although Messi was triumphant in the end, he was an unpopular choice among some fans. In an online poll, the majority of voters tipped Xavi to win the award, with Messi coming second and Iniesta a distant third.

Messi said: “I am surprised because the prediction was that either Xavi or Iniesta would win. I would like to thank those who voted for me, but Xavi and Iniesta were equally deserving because they had a great year and a wonderful World Cup.”

Iniesta and Xavi were part of the Spanish team that won the 2010 Fifa World Cup.

In 1978 Tutu was appointed the first black general secretary of the South African Council of Churches. A few years later, in 1986, he was elected Archbishop of Cape Town, also being the first black person in the country to assume such a post.

He has used his high profile to campaign for human rights and, previously, to fight apartheid in South Africa.

Following the deadly Soweto riots of 1976, during which black school pupils took to the streets en masse to protest against being taught in Afrikaans, Tutu supported an economic boycott of South Africa.

International companies soon started pulling out of the country and the rand’s value plummeted – this put heavy pressure on the government of the time to consider reforming the apartheid system.

Tutu was responsible for coining the phrase “Rainbow Nation”, which became a metaphor for South African society following the first democratic elections in 1994. The term has been so widely used since then, it has become ingrained in the South African psyche.

He is also regarded as a figurehead always ready to congratulate, critique and condemn the ruling government.

Former president Nelson Mandela once described him as: “Sometimes strident, often tender, never afraid and seldom without humour, Desmond Tutu’s voice will always be the voice of the voiceless.”

Tutu has won various awards including the Nobel Peace Prize in 1984, the Albert Schweitzer Prize for Humanitarianism in 1986, the Gandhi Peace Prize in 2005 and the Presidential Medal of Freedom in 2009.

The Nobel laureate retired from public life in October 2010 at the age of 79. He said: “Instead of growing old gracefully, at home with my family; reading, writing, praying and thinking; too much of my time has been spent at airports and in hotels.

“The time has now come to slow down, to sip rooibos tea with my beloved wife in the afternoons, to watch cricket, to travel to visit my children and grandchildren, rather than to be at conferences, conventions and university campuses,” added Tutu.