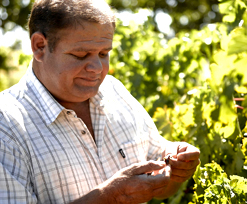 Farmers are positive that relations
between government and the agricultural
industry are back on track.

South African farmers say they are more optimistic about the future of the industry following a productive meeting with the country’s new agriculture minister, Tina Joemat-Pettersson.

“With the first meeting between the minister and Agri SA in Pretoria it was the first time that we were greeted courteously and treated as equal South Africans,” Free State Agriculture president Louw Steytler told Sapa.

Steytler reiterated his views at the meeting: “Standing before the congress today I am far more positive than the last six years [that the] winds of change and the voice of reason which farmers wanted to establish in the country are starting to form.”

Topics under discussion at the conference included food security, food affordability and sustainable land reform. Land reform has been a thorny issue between government and the farming community.

Government’s land redistribution programme aims to return land expropriated from black people by the apartheid government. This has created tension between the government and white farmers.

The government’s approach has been that of “willing buyer, willing seller”. Under this scheme the government buys land at its market value to return to claimants, but only if the current owner agrees to the sale and the price – thereby respecting the property rights protected by the Constitution.

The process has not been without its problems, though.

In their Agricultural Policy Statements (APS), Agri SA has stipulated a number of conditions to government in order to facilitate successful land redistribution:

The issue of safety and security for farmers and their labourers has long been a concern for the farming community.

In their APS, the organisation called on government to devise a more organised form of dealing with crime in the rural and faming areas of the country:

According to Steytler, farmers have had to turn into activists and crime fighters instead of farming. He said he was glad the government was now willing to pay closer attention to the problem.

“Crime, specifically farm murders and violence in the rural areas, became our focus point instead of the production of fibre and food,” he said.

The farming industry in South Africa has been facing difficulty in the wake of the recession, which has affected production.

To make matters worse, deteriorating relations with government made it difficult for the industry to have their issues dealt with efficiently.

The sentiment has however begun to change over the past few months.

Of significance to the Afrikaner community, who still dominate the farming industry, was the warmth shown by President Jacob Zuma as far back as 2007, during his campaigning in the run up to the African National Congress’ Polokwane conference, where a new party president was expected to be chosen.

In May this year Zuma extended another hand to the Afrikaner community by appointing Pieter Mulder, leader of the Afrikaner-dominated opposition party Freedom Front Plus, as deputy minister of Agriculture, Forestry and Fisheries.

Mulder was criticised for accepting the position, which was seen as weakening the opposition. In response he said it offered the Afrikaner community a chance be active in mainstream politics again.

“As FF Plus leader I had broadly engaged with Afrikaner cultural and agricultural organisations about the issue and asked their advice about the offer,” he said in a statement.

“Their overwhelming and unanimous reaction was that the hand of cooperation which is being extended to us but should not summarily be slapped away but should be seen as an opportunity.”

Agri SA also said it had been heartened by Zuma’s State of the Nation address of 3 July.

“President Zuma’s State of the Nation address was straightforward and depicted a clear vision for South Africa within Africa,” Agri SA president Johannes Möller said in a statement.

“The agricultural sector is not indifferent to poverty issues, unemployment and the general recessionary conditions, on which the president focused.”

One of the immediate tasks that the farming community and government are set to work together on is ensuring that the land redistribution programme is a successful.

“The minister wants a plan and she asked Agri SA to help,” Steytler said.