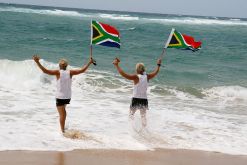 South African adventurer David Grier is braving torrential rain, extreme heat and blood-thirsty leeches in a world-first attempt to run the length of Madagascar during monsoon season. His motivation? To make a difference in the lives of children born with cleft lips and palates.

Through this epic trek 50-year-old Grier is helping raise money for Operation Smile South Africa, an NGO which pays for affected children, and sometimes even adults, to have corrective surgery so they are able to smile.

The adventure, known as Madagascar Challenge 2010, is a continuation of the Cipla Miles for Smiles Challenge that saw Grier complete a 4 000km run across the Great Wall of China in 2006 with friend and fellow adventurer Braam Malherbe. The two adventurers also finished a 3 300km run along the Southern African coastline in 2008.

But the Madagascar Challenge is by far the most difficult, the ultra long-distance runner said. It combines running, paddling and kite surfing – the latter two being new additions to Grier’s programme.

He started his journey on 1 December in Nacala, on the north coast of Mozambique, and paddled 500km over 11 days to reach Majunga in northwest Madagascar. After this he travelled to the island’s southern tip to begin his quest.

“I wanted to push the boundaries a bit to capture the imagination of the people following the event to prove that we can achieve what we set out to do,” Grier said of his decision to include paddling and kite surfing. The aim is to “bring awareness to the plight of these children so we can make a difference in their lives”.

The public is being urged to make donations through the Miles for Smiles website. Presentations on Grier’s adventure will also be made to businesses in South Africa to generate further funds.

Operation Smile South Africa was set up just before Grier and Malherbe started their run in China in 2006, and has funded operations for more than 1 000 people since.

Its first mission in Empangeni, KwaZulu-Natal province, in November 2006 provided free reconstructive surgery for 57 disadvantaged children and adults. In March 2008 the organisation funded operations for 31 similarly affected people in Swaziland and, by May of the same year, it went to Madagascar to do the same.

It’s hasn’t been smooth sailing for Grier and his support crew in Madagascar. The first challenge was paddling across the ocean and being hit by storms and a tornado.

Running solo, he has covered more than 800km, and is currently passing through mostly rain-drenched forest in central Madagascar. The run itself has not been straightforward, with Grier having to swim across bulging rivers to reach nearby villages to spend the night. The next morning he’s up again to hit the mountains.

Of the 800km he’s run, Grier still has “double that to do and more”. Weather permitting, Grier runs more than 40km a day.

It’s been raining heavily for seven days in the central villages he’s passing through at the moment. In the north, where he’s headed, there’s the threat of extreme heat and cyclones.

“The island is so diverse, the weather changes all the time. Down south is desolate and up to 40 degrees Celsius. In the north it’s going to be hot and then I am going to hit the cyclones. It’s going to get hectic,” he said.

Grier’s health was at risk during his earlier days on the island. He fell sick for a month while adjusting to Madagascar’s water and has already lost 8kg. “… Now it’s the leeches and tropical fever that have hit me.”

He said he’s very exhausted at the moment and feels like the parasites’ bites are draining his energy.

His cameraman and media liaison manager, Nick Heygate, is recovering after being infected by leech bites in the forest. Heygate has been severely affected over the past few days and had to be carried out of the mountains.

Grier had to endure running through deep sand in the south, and now he’s wading through “knee-deep swamp areas and red mud that just never dries”.

Although he’s supported by Heygate, Grier doesn’t have enough logistical help “due to the funding difficulty”. Heygate is being assisted by two Malagasy men who’ve provided transport for him through the forests.

“This has turned out to be a mammoth solo trip,” Grier said.

He hopes to complete the adventure in April and will kite-surf back to South Africa from the Indian Ocean island.

Man of many talents

So what does Grier, the father of four who missed his daughter’s birthday party in December and celebrated his in unknown territory last Saturday, long for back in South Africa?

“Just sit and appreciate my family and thank them for what they have had to endure unselfishly in order for me to be given the privilege of going out and making a difference,” he said.

He also missed his eldest daughter’s wedding in Austria and said he would have loved spending Christmas and New Year’s Day home. “I will miss my wedding anniversary as well.”

Grier is a man of many talents: he’s a celebrity chef, motivational speaker, photographer and published author. He has successfully summited Mount Kilimanjaro and completed numerous ultra-marathons, including the acclaimed Two Oceans Marathon (56km) and Comrades Marathon (90km) in South Africa.