Today, Sunday 15 March 2015 the country woke up to the tragic news of the passing on of one of our own, Minister Ohm Collins Chabane.

President Jacob Zuma and government learnt with great shock of this tragic incident. Minister Chabane passed away in a car accident together with his close protectors Sergeant Lawrence Lentsoane and Sergeant Lesiba Sekele, while on their way to Pretoria from Polokwane Limpopo.

Minister Chabane was a humble, disciplined, passionate and dedicated member of the Executive. He was truly devoted to his work of improving the lives of the people of South Africa. He was an intellectual giant with a great understanding of what we had to do to free our people from poverty. Minister Chabane was a humble person who would never put himself forward for anything as he often said “if I am doing something good, people will be the ones to tell”.

He was a gallant member of the African National Congress (ANC) and our liberation struggle, which he joined at the tender age of 17 years. He went into exile in May 1980 and underwent military training with uMkhonto we Sizwe, the armed wing of the ANC. He was later arrested and served a term on Robben Island from 1984 to 1990. He was popularly known by his guerrilla name as Tom or iSilwane/animal or warrior.

He dedicated his life to liberate the people of South Africa from the evil system of apartheid. Even in democracy, he continued to play a central role in ensuring that the lives of all our people are improved for the better and that they enjoy the fruits of our freedom.

Minister Chabane never lost contact with his roots; he met his untimely death while returning from the funeral of a local Chief Albert Magona of Malamulele in his home village in Limpopo.

President Jacob Zuma, after being informed of Minister Chabane’s passing on this morning, expressed his deep shock at the untimely death of a competent, accomplished, dedicated and dependable member of his Cabinet. President Zuma views the death of Minister Chabane as a huge loss to the government and the country as a whole.

Prior to being appointed, Minister of Public Service and Administration in 2014, Minister Chabane was Minister in the Presidency responsible for Performance Monitoring and Evaluation.

Minister Chabane also served as a member of the National Executive of the ANC since 1991 and from 2007 was elected to the National Working Committee.

He was a keen and passionate golfer and a recorded musician with his group Movement. He was honoured for his contribution to indigenous music by the South African Music Rights Organisation (SAMRO). He will be remembered for his great sense of humour, humility and hard work.

During this difficult time, on behalf of President Zuma, government and its people, we want to extend our sincere condolences to the Chabane, Lentsoane and Sekele families, friends and all South Africans who knew him.

We also wish the Chabane, Lentsoane and Sekele families and all South Africans who knew them strength and courage during this dark period as they attempt to come to terms with their loss.

Minister Collins Chabane, as a dedicated serving Minister will be accorded a Special Official Funeral. Details of which will be communicated at a later stage.

Minister Chabane is survived by his wife Mavis Chabane and two children.

May his soul rest in peace!

As the country mourns the tragic death of the Minister of Public Service and Administration, Mr Collins Chabane, South Africans are invited to pay their respects and sign the Condolence books to be placed in various areas across the country.

Mourners can convey their messages at the following areas: 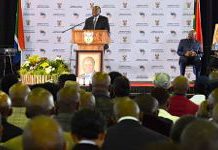 Chabane was ‘a quiet strategist who worked for the people’ 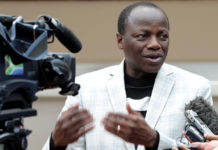