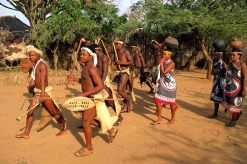 The Zulu culture comes under the
spotlight in 2010 with the opening of an
upmarket Zulu-themed venue in London.
(Image: South Africa Tourism)

An opulent new venue opening in April 2010 in London’s Camden district is themed around the famed Zulu king Shaka, and will offer the best of South African cuisine.

The £5.5-million (R66-million) venue, also a nightclub, will accommodate almost 750 people, according to the British Hospitality Association (BTA).

The multi-level venue is located in the Camden Stables market, northwest of the city centre. The historic stables market is part of the larger Camden Markets, several adjacent markets that are a popular shopping destination and tourist hotspot.

The project is the brainchild of Roger Payne, who also owns The Cuban bar and restaurant in Camden Markets. Other restaurants in the area offer a choice of interesting world cuisine ranging from Moroccan to Thai and Malaysian. Payne and Camden Markets have entered into a joint venture to develop the African restaurant.

Touted as “London’s hottest launch”, the upmarket Shaka Zulu will be located just below the glamorous pan-Asian restaurant Gilgamesh, in the heart of the Stables market.

The BTA reports that the ground floor of the venue, which will double as a nightclub, will accommodate 400 people, while the mezzanine area will accommodate 340 people. Patrons will be able to sample the finest Cape-style seafood in one themed restaurant, and savour specialty South African meats in another.

Speaking to Caterer Search, Payne described his latest project as “unique”. The restaurateur admitted to a boyhood fascination with King Shaka, and a long-standing interest in the differences between Zulu and British culture of that time.

“It will be a Las Vegas-themed show bar with fine dining … destined to become London’s number-one nightclub,” he said. The UK‘s celebrities are expected to make Shaka Zulu one of their favourite haunts.

Payne is also negotiating to bring South African food and beverage suppliers on board. Reports also say that the entrepreneur is in consultation with job creation enterprise Bayede, producer of a range of Zulu-inspired products ranging from fine beadwork and clothing, to accessories, bedding and even wines.

Bayede is endorsed by the reigning Zulu King Goodwill Zwelithini and his wife Queen Mantfombi, the daughter of Sobhuza II, former king of Swaziland.

Payne is sparing no expense – the cost of the interior décor alone, which will showcase 19th century Zulu culture, is estimated at around £2-million (R24-million). Enormous intricately hand-carved wooden panels feature majestic scenes from Africa – one of them, of an elephant, is said to be 20m high, 10m wide, and 2m deep.

Guests may feel a little intimidated as they approach the entrance under the gaze of a 15m bronze statue of the feared ruler himself, which will stand by the door.

The 2 400 square metre floor space will also encompass a VIP and cocktail lounge.

To ensure authenticity, the developers have held extensive consultation with members of the Zulu nation in South Africa, including King Zwelithini.

“We have also consulted the British Museum,” said a Shaka Zulu spokesperson. The cultural institution is famed for its vast African art galleries, which hold treasures gathered – although, some would say plundered – from all over the African continent.

The Zulu king is said to have been invited to the grand opening as guest of honour.

Shaka was born around 1787 near KwaDukuza, formerly known as Stanger, in KwaZulu-Natal.

His father Senzangakhona, a Zulu chieftain, had 16 wives, and his mother Nandi was also of noble blood. Because Shaka’s parents weren’t married he and his mother were shunned by both sides of the family, and they eventually settled with Nandi’s aunt among the Mthetwa tribe, led by Chief Dingiswayo.

As a grown man Shaka enlisted in the Mthetwa army. It was Dingiswayo who first saw the warrior’s leadership potential, and took him as his protégée, giving him the opportunity to rise through the ranks. Shaka was a ruthless commander, but his strict discipline and sharp military mind were an advantage for the army.

When his father died, Dingiswayo supported the young man in a bid to claim control of his people. This Shaka did, and immediately began to assimilate neighbouring clans into his domain, although he remained loyal to Dingiswayo.

The monarch died around 1818 and although it is suspected that Shaka played a covert part in this, there is no testimony to support the speculation. Shaka assumed the late Dingiswayo’s position and immediately began to expand the boundaries of his kingdom.

Shaka’s only real rival was Zwide of the Ndwandwe tribe, whom he finally conquered in 1826. Many of the Ndwandwe warriors pledged allegiance to Shaka, boosting the ruler’s army tremendously.

Shaka introduced a number of new military and social concepts during his reign. One was the iklwa, the short stabbing spear that was born of the long-handled assegai used for throwing. Shaka preferred his warriors to hang on to their weapons instead of throwing them, and to creep right up to the enemy and engage them at close range.

He also perfected the crescent-shaped military formation, the main part of which would fight the enemy while those on the outer wings moved to surround the foe. The Zulu army under Shaka fought many bloodthirsty wars and left thousands of people as refugees. As undisputed ruler Shaka showed no mercy to those who angered him, inflicting often outrageous cruelties on them. It has been said that he was responsible for the deaths of over 1-million people.

Shaka was on good terms with the occupying British colonial forces, traded with them, and allowed them to build a settlement at Port Natal, now the provincial capital Durban. During his rule there was harmony between the Zulus and the settlers.

When his mother Nandi died in 1827, Shaka went berserk, putting large numbers of people to death simply because they did not appear to be suitably grief-stricken. His behaviour eventually became too much for his people and it was at this time that his bodyguard Mbopha and half-brothers Dingane and Mhlangana fatally stabbed Shaka. The buried him in an unmarked grave near what is today the town of KwaDukuza.

As Shaka had no children, Dingane succeeded him as king of the Zulu nation.