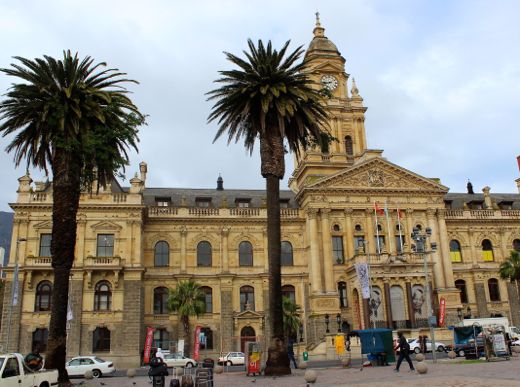 The Cape Town City Hall is a venerable old building, rather beautiful if colonial architecture is your thing, with its marble floors, massive organ, sweeping staircases and intricately detailed carvings.

This week it was colonised by an entirely different set from the stuffy, be-suited government officials of old; for this week, it was the venue of the third annual African Creative Economy Conference. Its cavernous rooms were filled with the lilt and laughter of many different accents; the brightly coloured, highly patterned clothing of West Africa rubbed shoulders with dreadlocked brothers and sisters.

It was a fun place to be, with about 400 delegates from over 40 countries in Africa and beyond. Organised by the Arterial Network, it was essentially a talk shop on how the continent’s creative industries can play a meaningful role in accelerating Africa’s economic growth, while building democracy and human rights. Let’s face it: the creative industries are a tough sell on a continent struggling with widespread poverty and all its associated ills. But the delegates were nothing if not energetic and committed.

Previous conferences – in Nairobi in 2011 and Dakar in 2012 – were used to create markets and raise the profile of Africa’s artistic and cultural industries regionally and internationally.

But it was outside the meeting rooms that the real fun was to be had – with plenty of networking happening between the performances and exhibitions of the African Creative Market, running alongside the talk shop. There have been film screenings, music events, dance performances, book discussions, art shows and craft exhibitions at venues in Langa and in central Cape Town’s design and innovation district.

One of the highlights was Siphiwe Ngwenya, founder of the Maboneng Township Art Experience. He grew up in the township of Alexandra, on the outskirts of Johannesburg. When he left school he had ambitions to establish himself as an artist. One day he walked for two hours from his home to a prominent art gallery with the intention of showing some of his paintings. He was turned away at the door. His response was to turn Alex into an art gallery – the Maboneng Township Arts Experience was born.

It turns ordinary homes in the township into art galleries and performance spaces – giving artists a platform to showcase their talent and sell their work. That was a decade ago; today, the Maboneng Township Arts Experience is in Alex, in Gugulethu in Cape Town and in Madadeni in KwaZulu-Natal. It has also turned Cape Town’s Langa township into a creative hotspot for the conference.

As Ngwenya says: good art is not what it looks like, but what it does to us.

The African Creative Economy Conference was an eye-opener, and a hugely enjoyable week to boot, with plenty of visceral and intellectual food for thought – and lots of art eye candy too.

If you didn’t make it down to City Hall this week, make sure you sign up for next year’s conference. The art and performances alone are too good to miss.