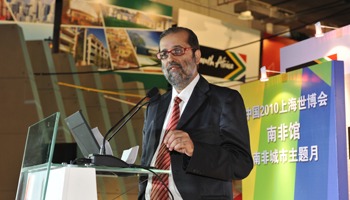 Shanghai, China – 8th June, 2010:  South Africa’s Deputy Minister of Cooperative Governance and Traditional Affairs Mr. Yunus Carrim has officially launched the June month theme of “Cities: Re-modeling Urban Communities” at South Africa’s Pavilion at Shanghai Expo. During the month, the Pavilion will showcase how South Africa has successfully redesigned and rejuvenated communities during the past 16 years following the abolition of apartheid in 1994 to create modern communities which promote racial, social and physical integration.

While the transformation is by no means complete, we are aiming to ensure that, over time, everyone will be able to enjoy decent accommodation, excellent services, and quality of life in sustainable neighbourhoods and vibrant urban spaces.”

South Africa’s examples of how it is overcoming the issue of not just urban regeneration but spatial remodeling of entire communities, demonstrates embodiment of “Better City, Better Life” put into practice.

Having built more than 2.7 million houses since 1994, South Africa has also built sustainable settlements which reduce energy use and are also better designed to encourage integration and create true communities.  The creation of decent housing also helps to stabilize the communities, creating jobs which in turn create a sense of pride among residents.

The theme of “Cities: the Re-modeling of Urban Communities” will run for the duration of June at the South Africa Pavilion at Shanghai Expo.  In addition to exhibitions, activities will include seminars to promote the exchange of ideas about how to design communities which can give inhabitants a “Better City, Better Life.” Upcoming themes will focus on Trade and Investment; Tourism; and Science and Technology.

Notes to Editors:
South Africa’s Pavilion design uses a traditional housing design of a Rondavel house with a modern twist as the centerpiece showcasing contemporary, modern living and showcasing how the home is the heart of the community.

Against this powerful backdrop, the Pavilion showcases a different theme each month through Shanghai Expo.

2000: South Africa and China sign the Pretoria Declaration on partnership relations, followed by the establishment of the Bi-National Commission (BNC), under which five sectoral committees, respectively on diplomatic affairs, trade, education, science and technology, and defense, have been set up.
2007: Cabinet Lekgotla’s decision of July 2007, identified China as the test case for coordinated planning and implementation of the country’s international relations; marketing South Africa abroad; and strengthening South Africa’s economic diplomacy – today being realized by Shanghai Expo.

2008: 10 year anniversary of diplomatic ties.  Strategic Partnership Dialogue between the Republic of South Africa and the People’s Republic of China launched on 7 January 2008 as another vehicle to consolidate the bilateral relations between the two countries.