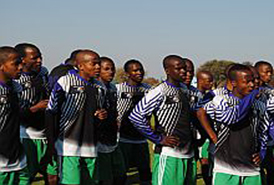 Before turning pro Khumalo was part of a scholarship programme at the North West University’s (NWU) Soccer Institute, but Amazulu snapped up the midfielder during this season’s recess after he impressed at trials. He is now based with the team in KwaZulu-Natal province.

It’s Khumalo’s former playmates and classmates who want to be just like him. The 56 youngsters are all part of the institute, where they are being primed to become top footballers. They are in their first, second or third year of tertiary study.

“I want to become a professional soccer player,” said 21-year-old Simphiwe Mafene during an interview. “We are all here with the same purpose of becoming professional players. “We look forward to stepping into Andile’s shoes,” Mafene added.

The growing football institute was set up in 2007 at NWU’s Mafikeng campus. It offers a three-year programme combining football training and academic studies.

Besides possessing a natural talent for the Beautiful Game, potential students need to attain a university-entrance pass at the end of matric. Promising players are recruited from all over South Africa.

Turning out well-educated footballers is part of the programme’s aim. “Gone are the when days when football players were not educated. We are creating something that our students will be able to fall back on when their football is finished,” said Khulu Nsibanyoni, the institute’s manager.

If students don’t join top-flight league teams after graduating, other possibilities are to become a coach or an administrator. A total of 10 students from the 2007 class graduated in 2009, and one of them – Machesa Kgomo – is already employed as the institute’s liaison officer.

All 56 scholarships are funded by the English Premier League, which in 2007 pumped £300 000 (now about R3.3-million or US$463 350) into the institute. Dave Richardson, the league’s chairperson, visited the institute when it opened three years ago.

“Richardson is the man who made it possible for us to secure funding for the scholarships,” Nsibanyoni said.

The 56 students are part of the NWU team that plays in the Vodacom Promotional League, where they compete with other 15 teams from North West province. Teams in the league vie for promotion to the national first-division league, where they then battle it out for a spot in the Premier Soccer League.

North West University FC, as the Mafikeng team is known, finished third in the 2009/10 Vodacom League, and is the current champion of the South African universities’ league.

Jan “Malombo” Lechaba, former Kaizer Chiefs dribbling wizard, mentors the team. Lechaba said he wants to create more top-quality players. “My fulfilment would be to have produced more than 10 players playing for the national team by 2014,” he said.

The players on scholarship have access to state-of-the-art training facilities, unlike most of their Vodacom League competitors. “You can see that our gymnasium is one of the best,” Lechaba said.

The institute works closely with the South African Football Association (Safa), which has endorsed NWU’s development model. It is hoped the model will be used for developing other young South African footballers as well.

The plan is that NWU will turn out quality players to take Bafana Bafana, the national football squad, to the 2022 Fifa World Cup.

A number of the institute’s players have already represented the country, albeit at a junior level. NWU footballers selected for the under-20 and under-23 national teams in the recent past include Sipho Nyafoza and Boalefa Pule.

“We want to create a global centre of excellence on African soil. We want to compete with the best in the world,” Govea said.