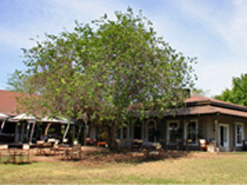 The main building at Kirkman’s Kamp is a fine example of the old colonial style.
(Image: Chris Thurman)

It happens to everyone who encounters animals in the African bushveld, from the most experienced game ranger to the first-timer “on safari”.

We see a giraffe munching on leaves and think of a baseball player chewing gum. Lionesses with cubs look to us like any human mothers of triplets would – exhausted, exasperated, while their broods run playfully over and around them.

Spotting an elephant stripping the bark off a broken branch by rotating it carefully in his mouth, we find ourselves stuck between similes: is he like a craftsman, turning a piece of wood in a lathe; or a guy watching rugby on TV, working away at a tough stick of biltong?

A group of young male buffalo, separated from the herd, remind us of a gang of moody, testosterone-filled teenage boys. A lone leopard, knowing no territorial boundaries and roaming over hundreds of kilometres, is Clint Eastwood or James Dean – an outlaw, a rebel without a cause.

Those who like long words call this anthropomorphism: seeing human characteristics in things that aren’t human.

Anthropomorphism is also what makes us pity the poor dung beetle, not only because of the unpleasant raw material Mother Nature gave him to work with, but because we see his daily struggle in terms of human endeavour. He can spend hours pushing a dung ball ten times his size up a hill, only to see it tumble down again – like Sisyphus who, in Greek mythology, was condemned to perform a similarly hopeless task for eternity as a punishment for disobeying the gods.

The male, presenting his carefully crafted ball to a potential mate, may have his proposal rejected: a failed suitor. Or the female might take up his offer, and join him in making a little dung-centred home: the perfect picture of husband and wife cooperating in domestic bliss.

But then there are sights that make us realise how irreconcilably different wild animals are to us. A lion at an impala kill, licking the dead animal’s neck with its rough tongue – not in a gesture of tenderness, but to soften the hide before taking the head in its mouth and cracking open the skull. A pack of hyenas chasing a leopard from a two-day-old buffalo carcass, before ripping into the rotting flesh with bloody abandon.

And there are stories about animal behaviour that seem to take the survival instinct, or the law of natural selection, to extremes: lions killing the offspring of competing males, or entire prides abandoning weak cubs to save their energy for nurturing offspring that are more likely to prosper.

We sometimes think that this is what separates us from animals – but as we know all too well from the evidence of human selfishness and violence, we have much in common with a natural world that is “red in tooth and claw”.

And yet, paradoxically, if we want to maintain some form of relationship with the animal kingdom we must overcome our “animalistic” impulses to destroy and, instead, desire to conserve. In the process, we might also learn how to treat our fellow-humans better.

That is, I think, what lies at the heart of our collective fascination with “the bush”, and what makes game viewing a mentally, emotionally and spiritually invigorating activity. It’s the reason that a stay in the bush is top priority for most tourists to South Africa and, for South Africans, it’s the reason that our pristine savannah is a source of national pride.

I was reminded of this on a recent trip to Kirkman’s Kamp in the Sabi Sand private game reserve, which shares a fenceless border with the Kruger National Park in Mpumalanga.

How far we have come, as even a brief acquaintance with the human history of the Sabi-Kruger area reveals. Just over a century ago, my great-great-uncle Harry Wolhuter was a game ranger in the newly-formed Kruger Park. His conservation efforts were stymied by a close encounter with two rogue lions: he was attacked, knocked off his horse and dragged almost 100 metres, before managing to stab one of the lions and climb a tree to escape the other.

Heroic stuff, indeed, and Uncle Harry’s legend has been proudly recounted by many of his successors over the years; but I’d prefer to watch a lion from the safety of a jeep, thank you.

A lion-killing Harry of an entirely different sort was Harry Kirkman. In the 1920s, Kirkman was given the job of managing a cattle ranch called Toulon Farm, owned by the foolhardy souls at the Transvaal Consolidated Land and Exploration Company.

Yes, that’s right: they decided to farm cattle in an area with what was then one of the world’s highest concentrations of lions. Go figure. It was left to Mr Kirkman to deal with the leonine menace – a job he was alarmingly good at, killing over 500 lions during his six-year stay at Toulon.

Fortunately, however, the land was subsequently sold to more environmentally-minded owners. Years later, the homestead once shared by Harry and his wife became the centre of Kirkman’s Kamp. This lends the lodge a “colonial” atmosphere, with large verandas and sweeping lawns offering a different aesthetic to other Sabi Sand lodges.

Style and architectural charm are one thing; the socio-economic legacy of colonialism and apartheid another altogether.

The “human ecology” in rural Mpumalanga – as throughout the country – remains fragile. Many people, desperate for food or some form of income, turn to poaching.

For this reason andBeyond – the company that manages Kirkman’s Kamp and other lodges in the Sabi Sand area – is attempting to address community needs: turning former poachers into trackers and rangers; helping schools and families to tend their own vegetable gardens; planting trees to provide shade in which plants can grow; and, crucially, undertaking educational initiatives to prevent the spread of HIV/Aids.

It seems, then, that humans and animals have more in common than we think – and protecting wilderness areas is a matter of mutual interest. So perhaps anthropomorphism isn’t such a bad thing: if we see ourselves in animals, and see animals in ourselves, we might just survive as a species after all.