Football Fridays is part of the Fly the Flag for Football campaign launched earlier this year. All South Africans are being encouraged to wear the shirt of their favourite team at the end of each working week to show support for our national team.

“The World Cup will define how people view South Africa. It will be a springboard for our country and our economy. It is your chance to play your part in delivering a full-colour World Cup,” says acting CEO of the International Marketing Council, Paul Bannister.

I recently set off from home proudly wearing my newly acquired Bafana Bafana soccer shirt. I imagined that I would see every second person wearing a sports shirt of their favourite team, but, alas, to my disappointment there were very few people who seemed to be supporting the Football Fridays campaign.

Could this be because they are unaware of our national initiative, Football Fridays, where we hope to build local support and enthusiasm ahead of the 2010 Fifa World Cup?

Why are our schools not supporting this campaign?

What fun it could be for kids to know that every Friday they could come to school wearing the jerseys of their favourite football club.

Let us encourage our national team by showing our support each Friday and, hopefully, with the reinstating of Parreira as the Bafana coach, this will bring results by the World Cup kick-off in June 2009.

By wearing a football shirt to work or just socially each Friday, you’ll be showing your true colours as a supporter of South Africa proudly hosting the biggest sporting event in the world.

We won’t get another marketing opportunity like in this in the next 100 years.

Come on South Africans, let’s get behind this campaign to build support and enthusiasm ahead of the World Cup.

Let’s show our “South African-ness” and start preparing to be good hosts when the football world arrives here next year. Learn our national anthem and sing it with pride to let the world hear us with one voice and see our colours in harmony.

For the few of us who were wearing our favourite football jerseys, we smiled to each other or gave a thumbs-up.

What a wonderful feeling to be connecting with people from all walks of life who would normally pass each other in the street without acknowledgement. It made me realise how we can unite as South Africans behind this event. I arrived home with a glowing feeling, knowing that in the smallest way possible I had contributed to building national pride. – Di Smith, Awesome SA 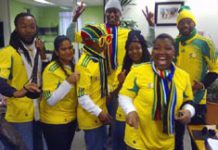 Football Fridays is back! 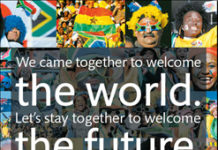 From Football Fridays to Fly the Flag Fridays 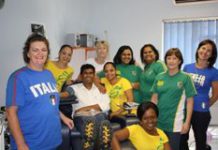 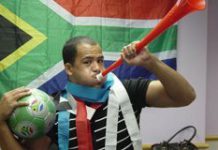 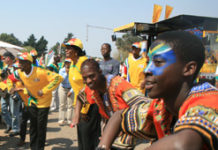 Get kitted for Football Fridays