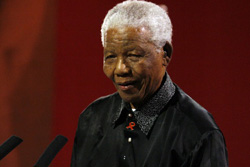 BRAND SOUTH AFRICA joined the rest of the country on Monday in welcoming the news of former president Nelson Mandela’s release from hospital, saying it shared the joy of Mandela’s family and wishing him “peace and comfort” at his home in Johannesburg.

“On behalf of all South Africans: Tata, you are in our thoughts and prayers,” Brand South Africa said in a statement.

“We share the joy of the Mandela family at the discharge of Nelson Mandela after 89 days in hospital. May he find peace and comfort in his home, among his relatives and friends, so that his continuing medical care can proceed with dignity.”

Mandela was discharged from hospital in Pretoria on Sunday morning in order to continue receiving treatment for a respiratory illness at home.

The Presidency said that the 95-year-old former statesman’s condition “remains critical and is at times unstable”, but that his team of doctors were convinced that he would receive the same level of intensive care at his home that he had been receiving in hospital.

Mandela’s home has been reconfigured to allow him to receive intensive care there. “The health care personnel providing care at his home are the very same who provided care to him in hospital,” the Presidency said. “If there are health conditions that warrant another admission to hospital in future, this will be done.”

During his stay in hospital, he received constant visits from family, friends and colleagues – and messages of support in the thousands from across the country and all over the world.

“We are all grateful for the outstanding care he received in hospital from a large team of medical specialists and nurses, which rescued him from the brink and which allowed for this miracle,” Brand South Africa said.

“Even in grave illness, Madiba has continued to provide a model to the nation and to the world with his immense grace and fortitude. We have, all of us, much to learn from him.”