Civic-minded people are needed to help build the country of their dreams. This is an important aspect to nation branding, which is not the work of the government alone, a group of students from South Africa and the US hears. 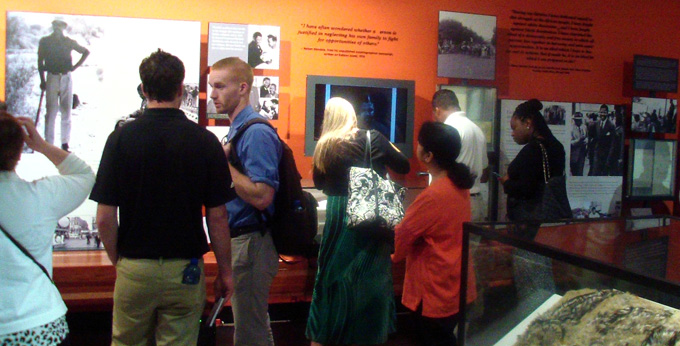 Students from Rutgers University in the US and South Africa’s Unisa explore the display at the Nelson Mandela Foundation before the Brand South Africa master class on nation branding.

Students were encouraged to become more civic-minded and involved by Sello Hatang, the chief executive of the Nelson Mandela Foundation, at an engagement hosted by Brand South Africa with communications and marketing students from Unisa and Rutgers University, in the US, on 17 March 2016.

The gathering took place at the Nelson Mandela Centre of Memory. Speakers from the foundation and Brand South Africa encouraged the students to play their part in creating the world they wanted. They also gave a tutorial on the philosophy behind nation building.

Hatang set the tone for speakers who followed him. “What am I doing to build the country of my dreams?” he challenged the students to ask of themselves.

Brand South Africa chief executive Kingsley Makhubela explained the difference between nation and product branding, saying the fundamental difference between the two was intent. A product created a designed identity where nation branding was about highlighting the best of who we were.

He talked about international tensions and how conflict continued to shape perceptions about the world we in which we lived. It was the trial nations faced every day: how to shape a positive view of the country despite challenges. “What do you communicate? The challenges? Or the potential and values of the nation?”

It was not a government’s concern alone. Citizens, including a country’s young people, had a responsibility to live the best values of their country. Makhubela reminded the students that it was their world as well and that they needed to become civically involved. Tension reshaped the world, but it was the passion of young people that remade the world.

Brand South Africa speakers did not shy away from topical issues of the day. Dr Petrus de Kock, the general manager of research, explained that in an environment where bad news often shaped perceptions, it was the responsibility of Brand South Africa to counter this through research, and then share that research as widely as possible.

The Rutgers students, especially, were visiting South Africa at a time in its history when the stream of negative news could, but should not, hide the facts about the strength of South Africa’s economy and democracy.

He listed statistics about budget clarity, strength of the banking and financial systems, press freedom and independence of the judiciary to highlight strengths that were often overlooked.

In his master class presentation on nation branding, Tshepiso Malele explained the rationale behind the idea. Every nation was unique and the purpose of nation branding was to distil that uniqueness and communicate it to as wide an audience as possible. The benefit was an enhanced country reputation and greater business and tourism engagement. He affirmed De Kock’s assertion that nation branding was not meant to be propaganda but information based on research and statistics. Ultimately, he said, a positive nation brand should benefit the people and institutions of the country.