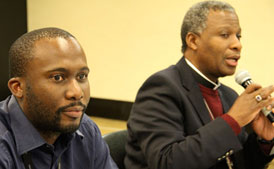 Makgamathe had been invited to present at the recent National Church Leaders’ Consultation Programme, put together by The National Religious Association for Social Development (NRASD). The programme was held on 15–16 October at the Southern Sun Hotel at O.R. Tambo International Airport.

Makgamathe introduced his presentation by saying there were definite synergies between the various aspects of the National Church Leaders’ Consultation Programme and Brand South Africa’s aims.

He pointed out that Brand South Africa sees engagement across all levels of leadership and society as key to its success and that, in essence, each and every South African is an ambassador for the country.

He further explained Brand South Africa’s role in marketing the country and managing its brand reputation. He pointed out that building pride among South Africans is key and highlighted the importance of encouraging all citizens to be proactive in tackling, among others, poverty, job creation and economic development.

The presentation also touched on the South African Competitiveness Forum, with Makgamathe saying: “Brand South Africa will be able to mobilise government, business and civil society to track a new trajectory for the country.”

He also talked about the Play Your Part programme, a nationwide Brand South Africa campaign to inspire, empower and celebrate active citizenship “for the desired outcome of creating positive social change”.

Makgamathe said that he sincerely believes that faith-based organisations have a role to play in changing the country’s narrative, to make the National Planning Commission’s Vision 2030 a reality.

“People must be active citizens who have creative and noble ideas within their sphere of influence, and who are able to take action on these ideas.”

He believes the church can play a leading role in dealing with the country’s challenges and says it is essential that “we get our story out there more positively”.

“Faith leaders have a critical role in entrenching positive norms and values in society which are important in realising the NDP (National Development Plan). Entrenching these values is in line with the nation-building project.”

He says Brand South Africa and the church leaders have much in common in terms of a vision of a brighter future for all South Africans.

“Both faith leaders and Brand South Africa believe that active citizenship has a key role to play in nation-building and contributing to the realisation of the National Development Plan.”

Makgamathe says he received much positive feedback at the dinner held after the formal presentations, with “the leaders keen to explore a partnership on promoting active citizenship amongst people living in South Africa”.

He hopes that the Brand South Africa presentation will have positive long-term effects.

“It’s part of the process of creating awareness of Brand South Africa among key stakeholders and engaging them in driving a social compact that will support the realisation of the NDP.”

The following day included a discussion on the way forward and included a report from Archbishop Makgoba followed by a presentation on the National Development Plan for 2030 from Pascal Paul Moloi, a member of the National Planning Commission.