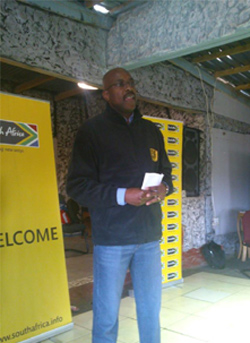 South Africans, and people from around the world, are being asked to set aside 67 minutes on Mandela Day to give back by making a positive social change in the communities where they live – to donate their time and resources to make it a day to remember for those who are less fortunate.

Staff members from Brand SA and supplier companies present are going beyond the recommended 67 minutes, and are spending the whole day with the children at the home.
Apart from giving out various presents of toys, educational items and shoes, those present are also making it a day to cherish by playing with the children – some helping them with reading, others with singing and yet others by turning up the music and dancing with the children.

The Ebenezer Hannah Home is an NGO catering for the orphaned, elderly and destitute.
It caters for people in the informal settlements of Thula Mtwana, Sweet Waters, Bheka Phambili and Majazane in the deep south of Johannesburg.

The Ebenezer home, established in 1992, is run by founders Thomas and Shirley Merime whose life story is the stuff movies are made off.
The couple both grew up in orphanages as Thomas’s parents abandoned him, while Shirley’s mother died of cancer. 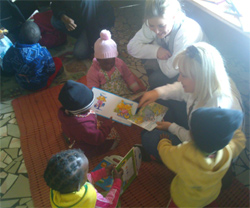 Staff of Brand South Africa and its suppliers celebrating Nelson Mandela International Day, 18 JulyAfter roaming the streets, Shirley ended up at the Roman Catholic Orphanage in Pofadder in the Northern Cape, where she met Thomas.

Shirley, a qualified teacher and Thomas, a building contractor, married and had children years later after settling in Eldorado Park in the south of Johannesburg, but their struggle continued.

Thomas had a violent streak and would victimise his family, which led to the couple divorcing and Shirley taking the children with her.

Thomas said: “I lost everything and nobody wanted anything to do with me. I was in the gutter.”
But Shirley said she never stopped praying for the man she met as a 10-year-old at the orphanage, and this led to the down-and-out Thomas becoming a pastor.
He said: “I not only got my family back, but also everything else I had lost and much more. Look at the size of my family at the moment.”