Free State delegates sign the Brand South
Africa pledge to uphold the nation brand and
position the country as a top investment and
tourism destination.

Brand South Africa headed to the Free State on 17 November 2011 to urge all residents of the province to build the nation’s reputation and position it for global competitiveness.

This was the message relayed at the fifth Brand South Africa Stakeholder Summit in Bloemfontein, attended by representatives from government, business and civil society.

Taking place in each of the nine provinces, the summits aim to increase provincial participation in the nation-branding effort and encourage active citizenship – which, in turn, will help position the country as a top investment and tourism destination.

Speaking at the summit, Brand South Africa programme manager for civil society Leo Makgamathe said that the branding of the country is not a matter of choice, but a necessity. 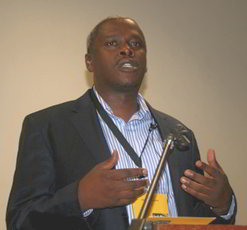 To be successful it requires the combined effort of government, citizens, business, political parties, charities, the media, academia and sporting organisations.

“With globalisation speeding up the production and movement of goods, services, investment and talent, perceptions of nations have to be actively managed,” Makgamathe added.

And this is no different in South Africa.

“This has underlined that South Africa is an important developing nation in its own right – which has to be marketed to the world,” Makgamathe said.

“The economy of the Free State is built on agriculture and its mines, but increasingly we are looking to tourism as a growth sector and hope to expand our manufacturing base,” the province’s MEC for Economic Development, Tourism and Environmental Affairs Mxolisi Dukwana said at the summit.

The Free State is also looking to diversify by developing its logistics capacity, ICT sector, innovation and research, agri-processing and pharmaceuticals.

“So what we, and South Africa, need is more investment. How people see a country is vital in this regard. The image of a country makes an integral contribution in attracting tourists, investors and in building trade relationships,” Dukwana added.

The government’s role in this is ensuring the country has enabling policies to attract trade and investment, but South Africans also have to believe in themselves to position the country as a viable destination.

“We must be bold enough to face our fears and challenges, and understand what we’re about. In doing that we can become our own marketers. In our diversity we also need to have one identity and be proud of it. Often we’re too negative and hard on ourselves,” the MEC told summit delegates.

“I urge all of you to do your ‘national service’ and respond when Brand South Africa calls, so that we can work together to create a truly great South Africa for all.”