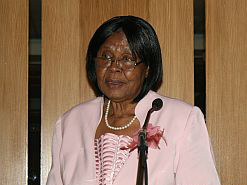 Black-owned emerging businesses are set to receive a welcome boost from a revised empowerment scheme recently introduced by government.

The Department of Trade and Industry (DTI) relaunched its Black Business Suppliers Development Programme in Pretoria on 28 July. It will offer financial support to small and medium-sized enterprises (SMEs) through a grant-application process.

The programme was initially launched in 2002 and has already given grants to more than 9 600 local companies. The revised one will focus more on funding machinery and other equipment required by black-owned firms. It is partially funded by the European Union Job Creation Fund.

As part of the country’s Broad-based Black Economic Empowerment policy, the programme is targeted at businesses that are more than 50% black-owned and all-women teams. The term “black people”, according to the policy, refers to coloured, African and Indian South Africans – all of whom were excluded from meaningful participation in the country’s economy during apartheid.

The programme will ensure that “small black businesses with potential are given the necessary assistance to grow their enterprises and become more competitive”, said the DTI’s deputy minister, Bongi Ntuli

The success of the programme will be measured by the growth of the funded companies in terms of winning major government and private-sector tenders, jobs created and annual profits.

“The launch represents a milestone in our efforts to support sustainable black businesses and small businesses in general,” said Tsepiso Makgothi of the DTI’s enterprise organisation division.

The revised programme will have a trial run from 1 September 2010, with applications open until 15 November. During this period the DTI will be targeting 2 500 enterprises across the country.

“The idea is to get as many applications as possible during these two months so that the process starts from there,” said Francisco Campos, a World Bank official who’s helping the DTI implement the programme. The World Bank’s role is purely to provide assistance – there is no financial involvement.

If the target is reached, “applications will be closed for the time being”, Campos said.

The programme will be piloted for 18 months until government launches the final version, which will allow time for improvements to be made, he added.

“I am confident that that whatever teething problems we find will be addressed in this pilot phase,” said Ntuli.

Since the initial launch in 2002, the DTI has set up a well-staffed unit to manage the programme. This, together with the new focus on funding equipment, will help the department better meet grant-applicants’ needs.

“The new one is far bigger, far better. We believe it will benefit the SMEs,” said Dr Meshack Khoza, CEO of Fresh Thinking Capital, a company that conducted a study on the scheme progress since 2002.

The DTI is hoping to reach companies from all over the country, even those in rural areas. It will embark on a massive drive to get the word out.

“There will be workshops throughout the country to create awareness,” said Campos.

The department has contracted facilitators in all nine provinces to run the workshops. “We’re relying on our facilitators to spread the message,” said Makgothi. “We’ll go throughout the country to inform people so that when we launch it by 1 September, they know about it.”

Although the World Bank is not funding the programme, it will monitor how the scheme is being implemented and conduct a study on it. Part of World Bank’s role is to ensure fairness and transparency in the roll-out process.

Campos said they aim to guarantee that “no one is excluded on the basis of not knowing anyone” and that “everyone has an equal chance” to get funding.

The programme began with just four beneficiaries in 2002, but over the years has provided financial support for 9 663 businesses. With about 52% of these being majority-women-owned, the scheme is ensuring that “more and more people have an opportunity to participate in the economy,” said Makgothi.