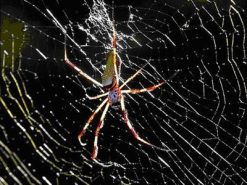 Scientists have discovered a new species of the golden orb weaving spider in South Africa – and the Nephila komaci is believed to be the largest of all golden orb weavers known to science.

The discovery, part of a project on nephilid spiders, heralds the first new species to be added to the Nephila genus for 130 years.

To date more than 41 000 spiders have been scientifically identified, and about 450 new species are added to the list each year – but not since 1879 has a new golden orb weaver been one of them. N. komaci is therefore quite an arachnological catch.

The nephilid project has received a funding grant of almost €800 000 (R8.8-million) from the European Union under its Sixth Framework programme for research and technological development.

The find, under the title Discovery of the Largest Orbweaving Spider Species: The Evolution of Gigantism in Nephila, was published in the 20 October 2009 edition of PLoS One, the open-access peer-reviewed journal of the Public Library of Science.

The species was first described in 2000 by biologist Matjaž Kuntner, when he came across a preserved specimen in the ARC-Plant Protection Research Institute just outside Pretoria. The specimen’s label dated back to 1978 and no-one knew if there were any living examples.

Kuntner chairs the Institute of Biology at the Slovenian Academy of Sciences and Arts, in Ljubljana, Slovenia, and is also a research associate at the National Museum of Natural History, Smithsonian Institution.

The scientist was surprised to find this giant spider that did not match any known specimens. He and his colleague Jonathan Coddington, also of the Smithsonian, headed several expeditions to South Africa to track down a live version of the intriguing creature.

Their quest was unsuccessful at first, and the team began to think the preserved specimen described in 2000 was a hybrid, or possibly extinct.

A second specimen, also preserved, and of Madagascan origin, was found in 2003 in the Naturhistorisches Museum Wien in Vienna, Austria. Out of more than 2 500 similar specimens in 37 institutions, this was the only other Nephila komaci found. The discovery enabled the team to conclude that the original spider was not a hybrid.

But since they had not yet found a living specimen of the mysterious arachnid, again the theory of extinction surfaced.

In 2007, with the help of colleagues in South Africa, a field trip to KwaZulu-Natal’s Tembe National Elephant Park unearthed one male and two female individuals, all alive and well. The scientists were finally able to confirm the discovery of a new species.

N. komaci is named after Kuntner’s best friend Andrej Komac, also a scientist, who died in an accident around the time of these discoveries. The genus name Nephila is taken from ancient Greek, meaning “fond of spinning” (nen: to spin and philos: love).

“We fear the species might be endangered, as its only definite habitat is a sand forest in Tembe Elephant Park,” said Coddington. “Our data suggest that the species is not abundant, its range is restricted and all known localities lie within two endangered biodiversity hotspots: Maputaland and Madagascar.”

He added that the discovery was just further evidence that “it’s a wonderful world”.

The two have issued a plea for the public to help them find more living specimens, and possibly whole populations of the rare creature.

The female Nephila komaci is the biggest spider of her type. Her leg span measures up to 12cm, about the size of a CD, while her body length is just under 4cm.

However, the male of the species is puny in comparison – at just 2.5cm he is small enough to ride on his mate’s back, which he spends much of his time doing.

This odd arachnid couple is typical of nephilid spiders, which show extreme sexual dimorphism – that is, the existence of two distinctly different forms within a species or on the same plant.

The scientific view for this phenomenon is that the female most likely evolved to her gigantic size to scare away small predators and be able to lay more eggs.

Despite the fearsome appearance and the possession of venom, the spiders are not dangerous to humans. The venom, explained Kuntner, works only on the spiders’ prey, which is mostly large insects, and will not poison a human.

Although there are spiders larger than the golden orb weavers, their webs are certainly the biggest of all. The spectacular webs can reach as large as 1m in width or more. They are durable enough to last several years, and can trap not only insects but small birds.

“Golden” refers to the colour of the silk, not the actual spider. Recently the silk from over 1-million industrious spinners was used to weave a one-of-a-kind textile.

Seventy people collected golden orb spiders from telephone poles in Madagascar over a four-year period. Using a machine that allowed them to process 24 spiders at a time, another 12 people collected about 24m of silk filament from each captive. Filaments were then woven into silk strands, each one containing 96 filaments.

The silk was carefully woven into a beautiful golden, 3.3m by 1.2m piece of cloth, the only one of its kind, which went on display at the American Museum of Natural History in September 2009.

The Tembe Elephant Park lies in the Maputaland region on the ancient “ivory route” which connected gold and ivory traders in pre-colonial Zululand and Mozambique.

The reserve is home to the last indigenous elephant herd in the province, comprising over 220 individuals, and boasts what is possibly the largest tusker in Africa – certainly the largest in Southern Africa. He is Isilo, a 65-year-old bull and herd leader.

Tembe is also home to one of the smallest antelopes in the world – the dainty suni, which stands just 35cm high at the shoulder. Ewes weigh more than rams but at just 5.4kg, they are still extremely petite creatures.

In addition to elephant, the reserve is home to the other four members of the Big Five – lion, leopard, black and white rhino and buffalo. Visitors can also see zebra, giraffe, all species of antelope indigenous to the habitats of the area (sand forest, grassland, wetland) and more than 340 bird species.

The reserve has one luxury lodge, which is 50% owned and fully operated by the local Tembe tribe. It offers all creature comforts, two game drives every day, meals under the stars, and other activities for the energetic visitor, such as scuba diving on reefs at the coast nearby.