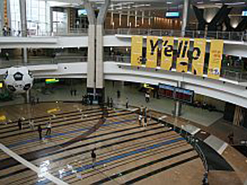 Bidvest, the first South African bank to buy and sell the Yuan, said demand for the Chinese currency by South African business and leisure travellers has been growing for some time.

“Local demand for Yuan is already significant and is expected to grow in view of increasing trade and travel links between China and South Africa,” the bank’s head of retail operations, Craig MacFarlane, said.

Bidvest announced in a statement on 27 September 2010 that it was now offering Yuan currency exchange services in its 102 branches across South Africa.

“Up-to-the-minute” rates are offered in the branches, Bidvest said.

The private bank prides itself in offering the South African market the “most extensive range of foreign exchange” with more than 60 currencies available.

“The Yuan is one of the new currencies being included in the bank’s already expanding currency note range,” said MacFarlane.

“Ours is an extremely dynamic and complex market,” said MacFarlane. “We monitor demand and developments in all currencies.

“We will continue to expand our range in line with our customers’ needs.”

Bidvest has urged its corporate and retail clients to note China’s currency restrictions. “They are only permitted to take into China or bring out a maximum of 20 000 Yuan. That’s about R20 000 (US$2 800), as the rate is close to one to one at the moment.”

Business travel between South Africa and China is expected to increase in future, as the two countries recently strengthened bilateral economic and trade relations.

The two countries have secured favourable market access for each other through more than 60 joint agreements since 1998.

President Jacob Zuma paid a state visit to the Asian country in August with a team of more than 370 South African business people. The delegates interacted with their Chinese counterparts through a forum set up to identify business opportunities in both countries.

During the forum Zuma said the South African government “envisages meaningful future cooperation” between the nations in areas such as infrastructure development, engineering, energy, information and communications technology and electronics.

China is now South Africa’s largest trading partner, after it surpassed the US last year. Total trade between the two countries was valued at R119. 7-billion ($16.3-billion) in 2009, according to the Department of International Relations, representing a 2% increase from 2008’s total of R118-billion ($16-billion).